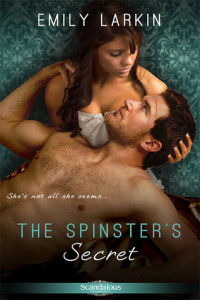 Penniless spinster, Matilda Chapple, lives at isolated Creed Hall, dependent on the austere charity of unloving relatives and under pressure to marry a man twice her age. In an attempt to earn enough money to escape this miserable existence, she writes a series of titillating ‘confessions’. Her secret is safe — until battle-scarred Waterloo veteran, Edward Kane, reluctantly accepts the commission to uncover the anonymous author’s identity.While staying at bleak Creed Hall, Edward finds himself unaccountably drawn to his host’s lonely niece. Can Matilda conceal the secret of her scandalous writings, or will Edward discover that the spinster and the risqué authoress are one and the same person? And when Matilda feels the need to experience sex as her fictional courtesan does–will she lose her heart to Edward, along with her virginity?

The Spinster’s Secret is available on Amazon

Why do you need to read this book? I loved the character of Mattie! She’s totally delightful – her stories and her drive to removed herself from the nasty house that she is living in. Loved this story!

Chapter One
His lordship swiftly divested me of my gown, placing hot kisses on the skin he bared. ‘You are a goddess,’ he breathed, as he untrussed my bosom-
Matilda Chapple glanced at the window. Outside the grey, overcast sky was darkening towards dusk. If she hurried, she could mail this installment of Chérie’s confessions before night fell.
Seizing me in his arms, he carried me to the bed, she wrote hastily. He pushed aside the froth of my petticoats with impatience. In less than a minute he had made his entrance and slaked his lust upon my-
Mattie halted, the quill held above the page, and squinted at her draft. What was that word? Feverish? Fevered? Fervent?
-upon my fevered body.
Mattie continued swiftly copying. Finally, she finished: We lay sated in the sunlight. For my part, I was as pleased by his lordship’s manly vigor as he was so evidently pleased by my feminine charms. I foresaw many pleasant months ahead as his mistress.
And on that note, dear readers, I shall end this latest confession from my pen.
Chérie.
Mattie laid down the quill. She glanced at the window again, hastily blotted the pages, and folded them. She sealed the letter with a wafer and wrote the address of her publisher clearly. Then she folded another letter around it and sealed that too, writing the address of her friend Anne on it: Mrs. Thos. Brocklesby, Lombard Street, London.
Done.
Mattie bundled up the draft and hid it with the others in the concealed cupboard in the wainscoting. She crammed a bonnet on her head, threw a thick shawl around her shoulders, and grabbed the letter.
There was still an hour of daylight left, but deep shadows gathered in the corridors of Creed Hall. The stairs creaked as she hurried down them. The entrance hall was cave-like, dark and chilly and musty.
‘Matilda!’
Mattie swung around, clutching the letter to her breast.
Her uncle stood in the doorway to his study, leaning heavily on a cane. ‘Where are you going?’
Mattie raised the letter, showing it to him. ‘A letter to a friend, Uncle Arthur. I’m taking it down to the village.’
Her uncle frowned, his face pleating into sour, disapproving folds. ‘I sent Durce with the mail an hour ago.’
‘Yes, uncle. I hadn’t quite finished-‘
‘Durce can take it tomorrow.’
‘I should like to send it today, uncle. If I may.’
Uncle Arthur’s eyebrows pinched together in a scowl. The wispy feathers of white hair ringing his domed skull, the beak-like nose, made him look like a gaunt, bad-tempered bird of prey. ‘Mr. Kane will be arriving soon.’
‘I’ll only be twenty minutes. I promise.’ Mattie bowed her head and held her breath. Please, please, please…
Her uncle sniffed. ‘Very well. But don’t be late for our guest. We owe him every courtesy.’
‘No, uncle.’ Mattie dipped him a curtsey. ‘Thank you.’
Outside, the sky was heavy with rain clouds. The air was dank and bracingly cold, scented with the smell of slowly-decaying vegetation. Mattie took a deep breath, filling her lungs, feeling her spirits lift, conscious of a delicious sense of freedom. She walked briskly down the long drive, skirting puddles and mud. On either side, trees stretched leafless branches towards the sky. Once she was out of sight of the Hall’s windows, Mattie lengthened her stride into a run. She spread her arms wide, catching the wintry breeze with her shawl. It felt as if she was galloping, as if she was flying, as if she was free.
At the lane, she slowed to a walk and turned right. The village of Soddy Morton was visible in the hollow a mile away.
Mattie crossed the crumbling stone bridge. The brook rushed and churned below, brown and swollen, its banks cloaked in winter-dead weeds. She blew out a breath. It hung fog-like in front of her. Icy mud splashed her half-boots and the hem of her gown, but a feeling of joy warmed her. She didn’t see the bleak landscape-the bare fields, the bare trees, the heavy, grey sky; she saw instead a cheerful boarding house with a cozy kitchen and a view of the sea through the windows.
Mattie inhaled deeply, almost smelling the tang of the ocean, almost tasting sea salt on her tongue.
Her grip tightened on the letter. Soon she would be free of Uncle Arthur, free of Creed Hall, free of Soddy Morton and Northamptonshire. Every word that she wrote and every confession she mailed to London brought the dream of owning a boarding house closer.
Soon it wouldn’t be a dream, it would be reality.

(23173)
$139.99 (as of January 29, 2023 10:51 GMT -08:00 - More infoProduct prices and availability are accurate as of the date/time indicated and are subject to change. Any price and availability information displayed on [relevant Amazon Site(s), as applicable] at the time of purchase will apply to the purchase of this product.)

Previous Post: « The Way to a Duke’s Heart by Caroline Linden
Next Post: Love, Desperately by Erin M. Leaf »