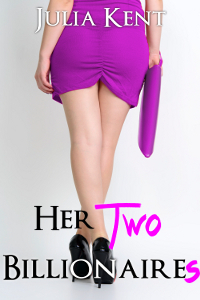 TWO MEN WITH TWO ENORMOUS…SECRETSDylan Stanwyck and Mike Pine are looking for a certain kind of woman. The firefighter and ski instructor aren’t picky – blonde, brunette, Asian, African-American, Caucasian, athletic, Rubenesque, boyish – any type will do, but there is one pesky little deal breaker – she needs to want a long-term threesome. So far, that’s caused some problems as Dylan took to the dating field and found no takers, search for someone he and Mike could share. Laura Michaels fits the bill – they hope. Working class stiffs who become accidental billionaires in a mysterious turn of events involving their dearly departed longtime lover’s estate, the men are looking now for a third to complete them.When Dylan discovers Mike’s gone behind his back and slept with Laura, the deception makes them both realize that they want Laura, desperately – to be their permanent third. The question is – how can they untangle the web they’ve caught them all in? Will Laura flee when she learns the truth?WHAT THEY DON’T KNOW IS THAT (SOME OF) THEIR SECRETS ARE HERSLaura Michaels took a last-ditch chance at online dating and hit the jackpot – twice. After waking up in Dylan’s apartment and being surrounded with pictures of his wife, she follows the advice to DTMFA – so she dumped him. Mike popped up out of nowhere on the online dating site where she met Dylan, and in a whirlwind two days she managed to sleep with both. Adding insult to injury, when Dylan appeared at her workplace disguised as a flower delivery guy, the truth came out: the pictures were of his dead lover. Passion overrode reason and Laura found herself caught between two incredible men.And wishing she could have both.Dylan and Mike might be in for the surprise of their life, because maybe – just maybe – Laura has some threesome desires of her own that she’s finding it harder and harder to control. When Dylan and Mike give them all an opportunity to consummate their brewing desires, the result is hotter and more passionate than any of them ever imagined, yet as Laura realizes she’d been manipulated, her old insecurities come back. Fleeing, she leaves Mike and Dylan wondering whether they’ve ruined their second chance at a perfect triad – but they haven’t seen the last of Laura….

Her Two Billionaires is available at Amazon

All-new Kindle (2022 release) – The lightest and most compact Kindle, now with a 6” 300 ppi high-resolution display, and 2x the storage - Black

(1706)
$74.99 (as of February 5, 2023 10:29 GMT -08:00 - More infoProduct prices and availability are accurate as of the date/time indicated and are subject to change. Any price and availability information displayed on [relevant Amazon Site(s), as applicable] at the time of purchase will apply to the purchase of this product.)