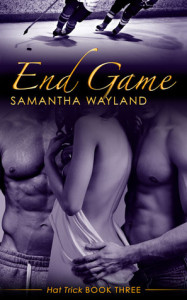 Garrick LeBlanc never intended to fall in love with two people, but he has, and now he has to figure out what to do about it. He wants to make them happy, but is afraid he’s doing just the opposite. To make matters worse, he’s trapped in New Brunswick until the end of the hockey season, while his lovers are both in Boston.

Savannah Morrison has no one but herself to blame for practically shoving her lover into the arms of another man. After all, it was her idea that Garrick take a lover while they are separated for the season. She loves Garrick with all her heart, but how the hell is she going to share him with Rhian?

Rhian Savage used to have such a simple life. Now he’s in love, his dreams of skating on an NHL team are coming true, and he keeps spotting a strangely familiar face in the crowds. To top it all off, he has to see Savannah every day. He knows she’s Garrick’s real future, but he doesn’t have the balls to do the right thing for all of them and end it—until his life goes sideways. As usual.

Now Rhian is alone, Garrick is heartbroken, and Savannah—the one person Rhian figured would celebrate his departure—is beating down his door. What the hell is up with that?

Why do you need to read this book? This book is the conclusion of an absolutely outstanding trilogy. Rhian, Garrick and Savannah are characters that I just fell in love with. So well written! I highly recommend this book and the whole trilogy in fact. Pick up the ebooks and enjoy!

End Game is available on Amazon

(239011)
$29.99 (as of June 29, 2022 10:19 GMT -07:00 - More infoProduct prices and availability are accurate as of the date/time indicated and are subject to change. Any price and availability information displayed on [relevant Amazon Site(s), as applicable] at the time of purchase will apply to the purchase of this product.)