Welcome to Sugarbeat’s Books – The Home of the Romance Novel!! 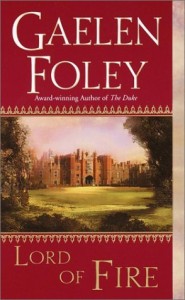 After years of preparation, he has baited his trap well, luring the depraved members of Society into his devil’s playground so he can earn their trust and uncover their secrets. Yet no one in London suspects that Lord Lucien Knight is England’s most cunning spy, an officer who has sacrificed his soul for his country. Now an unexpected intruder has invaded his fortress of sin, jeopardizing his carefully laid plans–and igniting his deepest desires.Beautiful, innocent, Alice Montague finds herself at the mercy of scandalous Lord Lucien. But as he begins his slow seduction to corrupt her virtue, Alice glimpses a man tormented by his own choices, a man who promises her nothing except his undeniable passion. . .

Why do you need to read this book? I just love Lord Lucien – I think this is the best book from this great series!!

Lord of Fire is available from Amazon

She groaned softly under his kiss and melted against him, the black satin of her gown sliding sensually against the white brocade of his formal waistcoat. Last night it had been skin to skin.

Though the twenty-seven-year-old baroness wore mourning for her late husband, Lucien doubted she had shed a tear. A husband, to a woman like Caro, was merely an impediment to her pursuit of pleasure. Her ebony gown had a tiny bodice that barely contained her burgeoning cleavage. The midnight fabric made her skin look like alabaster, while her crimson lips matched the roses that adorned her upswept, chocolate-brown hair. After a moment, Caro made an effort to end their kiss, bracing her gloved hands on his chest.

When she pulled back slightly, he saw that she was gloating, her cheeks flushed, her raisin-dark eyes glowing with amorous triumph. Lucien masked his insolent smile as Caro coyly lowered her lashes and stroked the lapels of his formal black tailcoat. To be sure, she believed she had done the impossible, what none of her rivals had ever achieved—that she alone had snared both Knight twins as her conquests and could now play them off each other for her own vanity. Alas, the lady had a large surprise in store.

He was a bad man, he knew, but he could not resist toying with her a bit. He licked his lips as he stared at her, then glanced suggestively at the nearby wall, cloaked in shadows. “No one can see us up here, my love. Are you game?”

She let out one of her throaty laughs. “You wicked devil, I’ll give you more later. Right now I want us to go see Damien.”

Lucien lifted one eyebrow, playing along with consummate skill. “Together?”

“Yes. I don’t want him to think we have anything to hide.” She gave him a crafty glance from beneath her lashes and smoothed his white silk cravat. “We must act naturally.”

“Good. Now, come.” She slipped her gloved hand through the crook of his elbow and propelled him toward the small spiral staircase that led down to the ballroom. He went along amiably, which ought to have warned her that he was up to something. “You swear you didn’t tell him?”

“Mon ange, I would never say a word.” He did not see fit to add that such was the bond between identical twins that they hardly required words for the exchange of information. A glance, a laugh, a look spoke volumes. Appalling, really, to think that this wanton little schemer, for all her beauty, was on the verge of snaring Damien in marriage. Lucky for the war hero, his snake of a spy brother had come to his rescue again with the crucial information: Caro had not passed the test.

Lucien bent his head near her ear. “I trust you are still coming with me to Revell Court this weekend?”

“What?” He stopped and turned to her with a scowl. “Why not? I want you there.”

Her lips parted slightly, and she looked like she might climax on the spot in response to his demand. “Lucien.”

“Caro,” he retorted. It was hardly a lover’s devotion that inspired his insistence, but the simple fact that a beautiful woman was a useful thing to have on hand when trying to catch enemy spies.

“You don’t understand!” she said with a pout. “I want to go. It’s just that I received a letter today from Goody Two-Shoes. She said—”

“From whom?” he demanded, cutting her off with a dubious look. If he recalled correctly, it was a character in a classic children’s story by Oliver Goldsmith.

“Alice, my sister-in-law,” she said, waving off the name in irritation. “I may have to go home to Glenwood Park. She says my baby might be getting sick. If I don’t go home and help take care of Harry, Alice will have my head. Not that I know what to do with the little creature.” She sniffed. “All he does for me is scream.”

(61139)
$38.99 (as of January 28, 2023 10:48 GMT -08:00 - More infoProduct prices and availability are accurate as of the date/time indicated and are subject to change. Any price and availability information displayed on [relevant Amazon Site(s), as applicable] at the time of purchase will apply to the purchase of this product.)