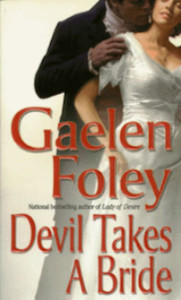 In the quiet English countryside, far from the intrigues of London, Lizzie Carlisle slowly mends her broken heart, devoting herself to her new on as lady’s companion to the Dowager Viscountess Strathmore―until her peaceful life is turned upside-down by a visit from “Devil” Strathmore, the old woman’s untamed nephew―a dangerously handsome man whose wicked reputation hides a tortured soul.

Devlin Kimball, Lord Strathmore, has spent years adventuring on the high seas, struggling to make his peace with the tragedy that claimed the lives of his family. But now he has uncovered the dark truth about the so-called accident and swears retribution. Then, to his astonishment, his eccentric aunt’s will forces him and Lizzie together, and Devlin finds his path to vengeance blocked by the stubborn but oh-so-tempting Miss Carlisle. Her passionate nature rivals his own, but disillusioned once by love, Lizzie will accept nothing less than his true devotion…

Devil Takes A Bride is available from Amazon

“Tell me, my clever Miss Carlisle,” he asked in a sinister purr as he pressed his advantage, stalking her aggressively through the room. “Are you in the habit of deceiving my aunt as you did me?”

“Obviously you have not heard a word I’ve said. I see there is no point in trying to reason with you in your present state.”She cleared her throat, determined to bring the situation under control, backing away as he advanced, step by slow, tantalizing step. “Wh-why don’t you go upstairs, change out of your wet clothes, and have something to eat? Then perhaps you will be in a more receptive humor— ”

“Don’t…manage me, little miss,” he taunted just as she found her retreat blocked by the sofa behind her.

She blanched, bending back as he leaned closer, trapping her against the couch. Her heart pounded wildly.

All dressed in black and wickedly handsome, he loomed over her, his shoulders so broad she could no longer see the door behind him. She gasped when he reached out and captured her chin between his black-gauntleted fingers, raising her face to inspect her.

She stared up at him, wide-eyed. A cynical smile full of menace and mockery curled one side of his lips as he studied her at close range, his pale eyes gleaming with dangerous intelligence.

Lizzie felt absurdly faint, a trifle dizzy. He smelled of winter and leather, wet horse and warm, ruthless male. For a moment, she could only watch, transfixed, as an ice crystal melted off his long, jet lashes with the throbbing heat of his body. Her gaze tracked the droplet’s trickling course down the scratched side of his sculpted face to the corner of his hard, beautiful mouth. When he licked it away, she caught her breath abruptly, jerking her face out of his light hold…

(222091)
$29.99 (as of December 2, 2022 10:14 GMT -08:00 - More infoProduct prices and availability are accurate as of the date/time indicated and are subject to change. Any price and availability information displayed on [relevant Amazon Site(s), as applicable] at the time of purchase will apply to the purchase of this product.)