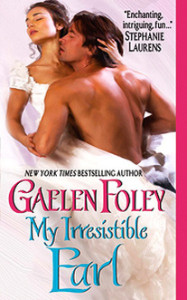 The Inferno Club: In public, this scandalous society of London aristocrats is notorious for pursuing all manner of debauchery. But in private, they are warriors who would do anything to protect king and country…She has loved him for as long as she can remember…Once, she had vowed to marry the Earl of Falconridge. Now, she vows to forget him. After he abandoned her for a life of shrouded secrets, Mara, Lady Pierson, has succeeded in keeping him away, until he appears in London unexpectedly, making her fall in love all over again.Forced back into Mara’s life by duty, Jordan quickly stays for love. He has never forgotten this passionate beauty and never meant to break her heart. But their newfound happiness is endangered—because the Inferno Club demands much of its members, and his vital mission is exposing a deadly plot that could threaten their very lives.

My Irresistible Earl is available at Amazon
Excerpt:
Prologue: Destiny’s PathEngland, 1804Being born into a secret, centuries-old order of chivalry sworn to the fight against evil was not a destiny for the faint of heart.As a newly minted agent, twenty-two years old, Jordan Lennox, the Earl of Falconridge, had just completed years of rigorous training at the Order’s remote, military-style school in the wilds of Scotland.

There, with his brother warriors, he had mastered all sorts of dangerous fun. He could scale sheer rock faces with naught but ropes and pulleys, had already swum the English Channel, could devise explosives out of a little saltpeter and random everyday objects found at hand. He was fluent in six languages, could navigate by the stars, and was so much at one with his smooth-bore rifle he could hit a bull’s-eye at fifty yards blindfolded.

These were basic requirements for any young knight of the Order about to be deployed on his first mission.

Jordan, however, more prudent, sensible, and cautious, than his headstrong teammates even at the start of their illustrious careers, had already made up his mind about how he did not want the spy life to affect him in the long term.

After years of observing the grim demeanor of their handler, Virgil, he had made a pact with himself not to end up like that.

Too many of the older agents had that same dark look: cynical to the point of bitterness, hard-edged, stony.

What was the point of taking the Order’s blood-oath to protect the Realm and everyone he loved–friends and family–if a man ended up as dead inside as an old, blackened hunk of petrified wood?

And so, wherever his future missions might take him, he vowed, he would not let his work for the Order become the only thing that he had in his life.

The key, as best he could figure, was not to lose touch with normal people, normal life, as silly and trivial as it sometimes seemed compared to the high-stakes shadow war that he and his brother warriors had pledged to fight.

Max and Rohan preferred to scoff at the oblivious people in Society, but Jordan, with his wonderful parents, adoring siblings, and countless cousins, found a certain quaint charm in ordinary goings-on.

Participating in all the social rituals helped him keep his balance–and it was for this reason that he accepted the invitation to the country house party.

He probably wouldn’t be able to stay the full month of July, he supposed, for any day now, he expected to receive his first assignment to one of the foreign courts presently under threat.

With Napoleon running amuck across the Continent, every agent was needed, especially those of high birth who could receive entrée into places and meet with people to whom common folk had no access.

But all this was a care for another day.

For now, there would be picnics, outdoor games, strawberry picking with the delicate young ladies, quadrilles with debutantes, perhaps a home theatrical at their hosts’ elegant country estate.

It was all so deliciously normal, the sort of pursuits in which any highborn young gentleman might while away the long, lazy weeks of summer. Jordan relished the chance to pretend for a while that he was no different than any of the other, well-heeled young rakes, aside from having already come into his title.

He was even prepared to let the other lads win most of the athletic contests. What he was completely unprepared for, however, was meeting Mara Bryce …

(11660)
$49.99 (as of January 28, 2023 10:48 GMT -08:00 - More infoProduct prices and availability are accurate as of the date/time indicated and are subject to change. Any price and availability information displayed on [relevant Amazon Site(s), as applicable] at the time of purchase will apply to the purchase of this product.)