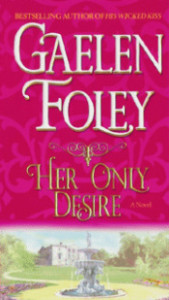 Spice Trilogy, Book 1: HER ONLY DESIRE

Born into the wealthy British ruling class of India, Georgiana Knight is as unconventional as she is beautiful. She has sworn not to marry till she meets a man who will treat her as an equal–but that vow doesn’t appease her sensual curiosity. When Ian Prescott, the Marquess of Griffith, arrives on a mission to defuse the threat of war, she is immediately drawn to the mysterious and darkly handsome diplomat, and cannot resist provoking the hidden lust that smolders beneath his cool surface.

Ian is mesmerized by Georgie’s alluring mystique but burdened by a dark secret. And she is a temptation he cannot afford. But when she becomes entangled in his mission, she must be secreted away to England for her own safety. Georgie finds herself in the unfamiliar world of aristocratic London, where Ian becomes her guide, her confidant . . . her seducer. His incendiary kiss sets her soul on fire, and Georgie knows she will never be satisfied until she has made this magnificent man her own.

Why do you need to read this book? To start with, this book is part of a trilogy, but also part of the Knight Family Series. I’ve finished reading the Knight series but it felt incomplete without reading these next three books. To be honest, I was surprised how much I enjoyed this book. I’ve read other historical romances set in India in the same time period and was off-put by the primitiveness of the era. Maybe the same information was present, but presented in a different fashion in this book. I found the various details about life in India in this era fascinating. It added a richness to the story that was wonderful! Georgiana and Ian are wonderfully rich characters – both bigger than life, but surprisingly they mesh perfectly! I hope that if you choose to pick up this book, that you enjoy it as much as I did!

Her Only Desire is available at Amazon
Excerpt:

Georgiana Knight urged her fleet-footed mare onward, dodging rickshaws, pedestrians, and sacred cows that loitered in the road until, at last, she reached the riverside, where a gathering of some fifty people surrounded the funeral pyre.Towering flames licked at the azure sky.The sickening, charred-meat smell made her stomach turn, but she would not be deterred. A young girl’s life depended on this rescue–more than that, a dear friend.

The relatives of old, dead Balaram now noticed Georgie’s approach. Most of them still milled about the funeral pyre, sending up all the spectacle of mourning for the respected town elder, wailing and waving their hands, but a few watched her uneasily as she arrived at the edge of the crowd.

They knew the British detested this holy rite, and she quite expected that at least a few of them would try to stop her.

The self-immolation of a virtuous and beautiful widow not only pleased the gods, but brought great honor to her family and that of her husband. Burning herself alive in a ritual suicide just to honor her husband’s name!

There could be no more perfect illustration, Georgie thought, of everything that was wrong with the whole institution of marriage–in both their cultures. It gave all the power to the man. And, good heavens, the way females were treated in the East was enough to put any sane woman off marriage entirely.

A cheeky aphorism from the writings of her famous aunt, Georgiana Knight, the Duchess of Hawkscliffe, for whom she had been named, trailed through her mind: Wedlock is a padlock. Well, today, she would not allow it to become a death sentence, too.

Then she spotted dear, gentle Lakshmi standing before the blaze in her red silk wedding robes, heavily encrusted with gold and pearls. The raven-haired beauty was staring at the fire as though contemplating what agony she would know before oblivion.

Absorbed in her thoughts and no doubt lightly drugged with betel, the dead man’s bride was not yet aware of her British friend’s arrival.

Angered by the smoke, the white mare reared up a bit on her hind legs as Georgie pulled her mount to a halt at the fringe of the funeral crowd; she gave her horse a firm command to stay and leaped down from the saddle.

Murmurs rippled around her as she stalked through the gathering, her sandals landing firmly in the dust with each long, limber stride. The tiny silver bells on her anklet tinkled eerily in the hush.

Everyone knew the two girls had played together since childhood, so perhaps the relatives thought she had merely come to say her last goodbyes. Lakshmi’s family were wealthy Hindus of the Brahmin caste, on a par with the aristocratic rank of Georgie’s clan in their respective cultures.

They let her pass.

Behind her, she now heard Adley’s rather noisy arrival at the edge of the crowd, tumbling along after her, as always, but Balaram’s relatives did not let the foppish young nabob any closer. She could hear him sputtering with indignation.

“I say! This will not do! Miss Knight! I am here–should you need me!”

She did not look back, focused on the dire scene before her.

The massive bonfire had already turned old Balaram’s bones to dust when Lakshmi looked up from the inferno and saw Georgie marching toward her.

(9550)
$29.99 (as of September 30, 2022 16:40 GMT -07:00 - More infoProduct prices and availability are accurate as of the date/time indicated and are subject to change. Any price and availability information displayed on [relevant Amazon Site(s), as applicable] at the time of purchase will apply to the purchase of this product.)