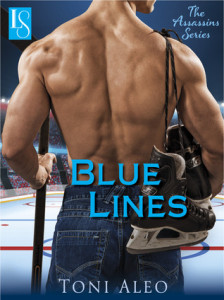 Opposites do more than just attract in Toni Aleo’s latest Nashville Assassins novel about a very bad boy and the good girl he can’t resist.

The instant Piper Allen sees Erik Titov, she wants him—wants his rock-hard body, sure, but the strength and mystery that lies behind that superstar hockey jock demeanor, too. So when he sidles up to her at a bar and slinks his arm around her waist, she’s lost. What follows is the wildest night of her life . . . followed by inevitable heartbreak the next morning. And then, a few weeks later, a very big surprise: two blue lines on a pregnancy test.

Only a check to the head could make Erik fall for a nice girl like Piper. But since their crazy-sexy night together, he’s been trying to forget about her alluring body by falling into bed with every woman in Nashville, and it’s not working. So when Piper shows up at his house with a baby-bomb to drop, it doesn’t take much for Erik to suggest the nuclear option: marriage. While it’s supposed to be all for show, the second they say “I do,” the ice between them starts to melt into sizzling steam.

Why do you need to read this book? Toni Aleo is an awesome author and does a great job of weaving chatacters together. Blue Lines is another great story from her!

Blue Lines can be purchased at Amazon

He watched as Piper’s shoulders fell before her full lips went in a straight line.
She took in a deep breath and then looked up into his eyes. Her bright blue eyes,
held his hostage and she muttered the words that for some reason he knew she was going to say, “It’s yours.”

Erik paused, then let out a loud nervous laugh,
“Yeah right, we haven’t been together since December.”

She nodded and said, “I know, I’m almost six months.”

(13903)
$79.99 (as of February 1, 2023 10:13 GMT -08:00 - More infoProduct prices and availability are accurate as of the date/time indicated and are subject to change. Any price and availability information displayed on [relevant Amazon Site(s), as applicable] at the time of purchase will apply to the purchase of this product.)