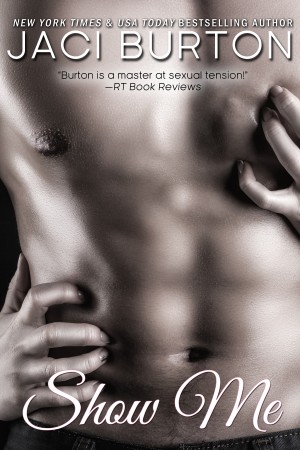 He promises to indulge her secret fantasies, if only she dares to accept.

Socialite Janine Bartolino has always been in the public eye. Managing her late father’s philanthropic interests, she keeps her pastimes above reproach. But when a surprise thirtieth birthday celebration at a private club opens her eyes to wicked pleasures, and an intriguing man offers her the chance of a lifetime to indulge her every secret fantasy, Janine takes a leap of faith…at great personal risk.

Phillipe “Del” Delacroix knows what Janine wants, even if she isn’t aware of it herself–a chance to explore the world of voyeurs and exhibitionists. Soon, the once staid and reserved woman transforms into a daring and passionate lover, giving Del everything he could ask for in a partner. But when something happens that puts Janine’s reputation, her career, all she’s worked for, in jeopardy…Del must prove that loving him is worth the risk.

Why do you need to read? Love, love love this book! It sizzles! Enjoy the excerpt below and then race over to Amazon 🙂

Show Me is available from Amazon

Janine whirled at the voice behind her. Her smile died as recognition dawned.

“Del? What are you doing here?”

His lips curled. “I was invited.”

He shrugged. “By whomever does those things for your foundation, I imagine.”

Just looking at him made her mouth water. Dressed casually at the club, he was delectable and sexy. In black tux, he was devastating. This was a man who could be comfortable dressed to the nines or lazing about in jeans. And he still sported that scruffy unshaven look, even in his tux. God, he was handsome. His dark eyes that seemed to be able to see through her just made her melt.

Then recognition dawned as she remembered his introduction the other night. “Delacroix Motors. Foreign imports.”

That’s why he was on the guest list. Very important businessman. Lucrative company, too. The foundation had worked with his company before, and Delacroix had always been extremely generous. She didn’t know why she hadn’t made the connection the other night. Probably because she didn’t expect the head of Delacroix Motors to have anything to do with owning and operating a sex club.

“Because you’re a prominent member of the community. And you own a…”

“Club for voyeurs and exhibitionists?”

“Shhh.” She dragged him over to a corner of the room, out of earshot of the other guests. “I can’t believe you’re so blasé about this.”

His lips curled. “That’s because I don’t give a shit what people think. You should try it sometime.”

“Easy for you to say. If anyone found out I was there the other night—”

“What? The world would stop turning? The stars would fall from the sky? The global markets would all crash?”

She sniffed. “That’s not funny.”

“Nothing would happen, Janine. You’re entitled to a life.”

“Because the newspapers would drool over news like that. They’d love nothing more than to dig up some dirt about me, to muddy the pristine reputation of the foundation.”

“Not at all. I’ve seen it happen. When you’re in the limelight, the paparazzi stalk you just waiting for you to slip.”

He turned around. “Nobody’s even looking in our direction, not the slightest bit interested in you and I talking.”

“That’s because they wouldn’t expect anything to happen here.”

Del arched a brow. “Kind of gives one ideas, doesn’t it?”

Despite her irritation, she flushed with heat. “It doesn’t give me any ideas.”

Too late. He’d grabbed her hand and tugged her through the crowd and toward the dance floor. Short of causing a scene by digging in her heels and wrenching away from his grip, she was stuck having to go along with him. Dammit.

The dance floor was crowded, as well it should be. She’d hired a fabulous orchestra, the strains of violins playing a slow, seductive melody. Del pulled her to the middle of the floor and drew her against him.

“You look beautiful in gold,” he said, once again showing his prowess as a dancer, gliding her with no effort through the dance. “You dress to show off your body.”

She looked down at the dress, glittering, floor-length and hugging her curves. She loved this dress because it sparkled. She loved the slit in the middle because it showed off a little leg, her best feature, and hoped it would detract attention away from the fullness of her hips. Did she buy it to exhibit her body? Hardly. She’d never thought about that. This event was for the foundation, not to catch a man.

“There’s nothing wrong with showing off your assets. You have a beautiful body.”

“And you need to work on your self esteem. Maybe you need to spend more time looking in the mirror. Naked.”

“I don’t have body image issues. Nor do I spend my time staring at myself naked in the mirror.”

“Try it sometime,” he said, his gaze roaming toward her breasts. “You might enjoy it.”

She shook her head. “You and I are from completely different worlds, Del.”

“I don’t think so. I live in the same world you do. I run a successful business, am publicly involved in the community, but no one knows what I do for fun. I’m very discreet, but I enjoy my pleasures. I’ve spent several years as the owner of Sneak Peek while still maintaining Delacroix Motors, and guess what? No one has ever found out, because it’s none of their business and I make sure to keep it that way.”

“Lucky for you that you have that anonymity.”

“And I think you want what I have to offer. You’re just afraid to take that step.”

The smile he cast wasn’t smug, exactly… more triumphant. “You’re worried. You think people watch you all the time. Look around. No one is paying attention to us.”

She did. As Del turned her, she gazed at the others on the dance floor. None of them looked at her. They were focused on their partners. And beyond the dance floor, people were talking amongst themselves or busying themselves at the back tables where the silent auction was going on.

Still, she felt eyes on her. Why? Why couldn’t she let go, as Del suggested?

“I could touch you intimately right here on the dance floor and no one would notice.”

Her breath caught and she shook her head, her traitorous body responding to his suggestion with a quiver of anticipation. “No.”

“The lights are low over the dance floor, the crowd noisy. People are packed in and enjoying each other. If I moved my hand like this…” His hand at her back traveled down, over her buttocks, gently caressing her. Janine sucked in her bottom lip as pulled her tighter into his embrace.

“It’s just a dance, Janine. Relax and enjoy it.”

(41998)
$139.99 (as of February 5, 2023 10:29 GMT -08:00 - More infoProduct prices and availability are accurate as of the date/time indicated and are subject to change. Any price and availability information displayed on [relevant Amazon Site(s), as applicable] at the time of purchase will apply to the purchase of this product.)