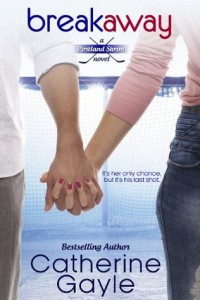 She’s reaching for a breakaway pass.

Dana Campbell has spent the past seven years in self-imposed isolation for a crime she didn’t commit. The danger is well in the past, but her panic attacks make it impossible to have a normal, healthy relationship with a man. Even her counselor has given up on her. She has to find someone she trusts to help her fight through the panic, or her seven-year ordeal will become a lifetime sentence. There’s only one man she feels safe enough to ask.

He got caught with his head down.

As the captain of the NHL’s once elite but now fading Portland Storm, Eric Zellinger knows a thing or two about keeping his focus on the job. Questions are flying about his ability to lead the team back to the playoffs. If they don’t make it, he might be shipped out of town. It’s the worst time possible for his best friend’s kid sister to divide his focus. How can he give her what she needs without jeopardizing both the Storm’s playoff hopes and his future with the team?

It’s her only chance, but it’s his last shot.

Breakaway can be purchased from Amazon

Why do you need to read this book? I read this series of books in boxed sets. After reading about 10 of the series now, I think this book is the best. Get yourself a box of tissues and have a happy cry!

(127482)
$124.99 (as of July 1, 2022 10:23 GMT -07:00 - More infoProduct prices and availability are accurate as of the date/time indicated and are subject to change. Any price and availability information displayed on [relevant Amazon Site(s), as applicable] at the time of purchase will apply to the purchase of this product.)