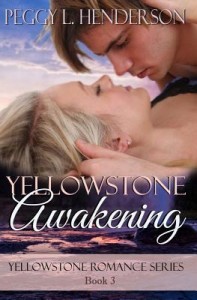 Book 3 in the Yellowstone Romance Series

A man willing to risk everything, including his life and all he’s worked for, to free the woman he loves from an impossible situation.

Kyle Russell has worked with prominent men, led scouting expeditions through the Yellowstone country, and irritated more than a few Indian braves, but he will never duplicate his father’s legendary accomplishments. Captured by a group of Crow warriors, his plans of escape are derailed when a lone white woman is brought into camp.

Kate Ellen Devereaux is on the run. Her guardian is dead, and she is lost in the Yellowstone wilderness. Found by an Indian war party, she is brought into their camp and thrown at the feet of a white captive. If he has plans of escape, she won’t be left behind.

Kyle’s father may be a legend in the territory, but he never had to deal with an eastern lady full of secrets, a woman who disrupts Kyle’s plans to see the Yellowstone area turned into a national park. Convincing her that they are destined to be together may be a greater challenge than gaining support for the park movement. Kate can’t afford to show interest in any man, regardless of her growing attraction to her backwoods rescuer. Will her ultimate reason for rejecting him spell doom for their growing love, and the national park idea, or can Kyle find a way to rescue both?

(629)
$24.99 (as of November 25, 2022 10:02 GMT -08:00 - More infoProduct prices and availability are accurate as of the date/time indicated and are subject to change. Any price and availability information displayed on [relevant Amazon Site(s), as applicable] at the time of purchase will apply to the purchase of this product.)