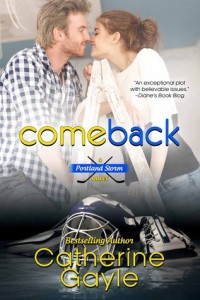 Nicklas Ericsson is an addict. He’s also a star goaltender with the NHL’s Portland Storm, or he was until his addiction changed everything. Now he’s throwing himself into doing all the necessary things to pave his path to a comeback, both in his personal life and on the ice. Nicky’s run out of options, and now his sister and her children are in Portland. They need help he has no clue how to provide, though, and figuring it out might derail all the progress he’s made.

For a few years now, Jessica Lynch has been running the Portland office for the Light the Lamp Foundation. Between her work and several people from her past, she knows more than she’d like about addicts. One lesson she’s learned is that even when addicts try to turn their lives around, more often than not, they fail. That’s why she takes a hands off approach, keeping her heart well away from the addicts she works with, like Nicky Ericsson.

Nicky’s recovery efforts put him directly in Jessica’s path, and she can’t ignore his very real need for help. Where Nicky is concerned, she can’t separate her emotions. His niece and nephews further complicate her efforts to guard her heart. The attraction between Nicky and Jessica is instant and mutual, but she’s misplaced her trust too many times before. Can he prove that he won’t fall back into old habits in time to complete the perfect comeback?

(16181)
$17.99 (as of January 28, 2023 10:48 GMT -08:00 - More infoProduct prices and availability are accurate as of the date/time indicated and are subject to change. Any price and availability information displayed on [relevant Amazon Site(s), as applicable] at the time of purchase will apply to the purchase of this product.)