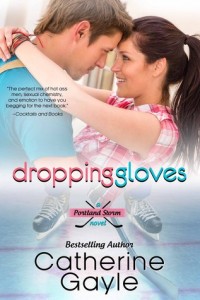 Katie Weber left her heart in Portland to chase a career in Hollywood. Now she has returned to sing the national anthem for the Portland Storm for their annual Hockey Fights Cancer night. Her longtime crush, Jamie Babcock, is hurting just as much as she is. One look in his eyes is all it takes to know that. She’s done the Hollywood thing, though, and she’s over it, but it might be too late to dig herself out of the hole she’s dug with him.

Jamie’s already done everything humanly possible to let go of Katie, but she keeps coming back, and she keeps crushing him all over again every time she leaves. His heart has been trampled on more than enough already. At some point, he has to draw the line. Doesn’t he? Only, when it’s Katie, he’s not sure that’s even possible. She’s in Portland again right now, but he can’t be sure for how long.

Katie knows she has a fight on her hands, in more ways than one, if she’s going to convince Jamie she deserves another chance, but she’s willing to drop her gloves this time. Because in the game of love, all bets are off.

(34048)
$29.99 (as of January 28, 2023 10:48 GMT -08:00 - More infoProduct prices and availability are accurate as of the date/time indicated and are subject to change. Any price and availability information displayed on [relevant Amazon Site(s), as applicable] at the time of purchase will apply to the purchase of this product.)