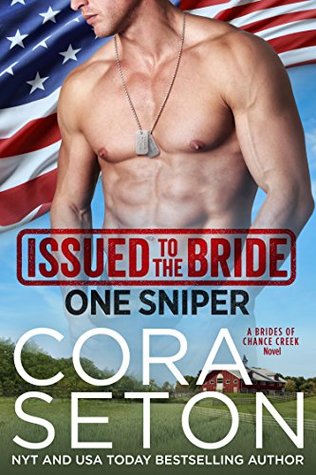 Sniper Hunter Powell thought he lost everything when he took the rap for a crime he didn’t commit in order to save a friend. Now he’s got a chance to redeem himself. There’s only one catch–he has to leave the military, settle down on a Montana ranch–and marry a woman he’s never met before. A woman so young and sheltered he can’t believe she’ll have any interest in a hardened warrior like him—even if her fierce independence, hot-tempered humor, and unexpected beauty has got him plenty interested in her.

Jo Reed watched two of her sisters marry the men her father sent to help them on the family ranch, so when Hunter arrives, she’s ready for him. She doesn’t want a husband; she wants a house of her own where she can call the shots—and if the Navy SEAL wants to stay, he’d better build it to her specifications. More to the point, he’d better stop kissing her.

Hunter knows he’s not supposed to build Jo a house—he’s supposed to marry her. But first he’s got to earn her trust—and stop treating her like a new recruit. The longer he’s around the headstrong woman, the more he wants to be around her.
Despite her best intentions, Jo’s falling for the Navy SEAL, but she’s already been unlucky in love twice. Will the third time around be the charm?

Or the last straw?

(41223)
$59.99 (as of February 2, 2023 10:13 GMT -08:00 - More infoProduct prices and availability are accurate as of the date/time indicated and are subject to change. Any price and availability information displayed on [relevant Amazon Site(s), as applicable] at the time of purchase will apply to the purchase of this product.)