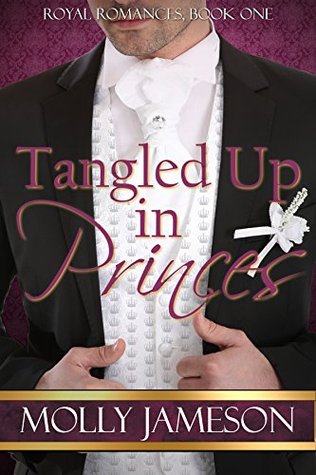 What could be more romantic than a wedding in a Scottish castle?

For Carrie MacCallum, sister of the bride, the answer is finding herself pressed against an impossibly handsome man in a curtained alcove inside said castle. His slow burn smile is enough to have Carrie thinking of more than moonlit walks beneath a canopy of stars. She’s thinking about a fling. Or she would be, if she were the type of woman who thought about flings, which she most certainly was not. She was a knitting shop owner from Kentucky. She was not at all the kind of woman who would have a fling.

Edward, Duke of Lancashire and second son of Great Britain’s reigning king, was hiding in an alcove. He was used to being discovered by the paparazzi, but being discovered by very possibly the only woman in the world who didn’t recognize him as a member of the British royal family was a new experience for him. And a tempting one. When was the last time he’d gone out with a woman and not wondered if it was the idea of becoming a princess she fancied instead of him?

In their chance encounter, Carrie and Edward find in each other their heart’s desire, but when Carrie’s sister —the bride, and Edward’s brother, the Prince of Wales — not the groom, are discovered in a compromising position,, it’s up to Carrie and Edward to save their siblings, their families’ reputations, and the British monarchy from an international scandal.

Tangled Up In Princes is the first book in Royal Romances, a new, smart and sassy romantic comedy series that will delight fans of “The Princess Diaries” and “The Royal We.” If you just can’t get enough of the real royals, then Royal Romances is for you. Molly Jameson’s contemporary romance series features an alternate British monarchy with seven princes and princesses of marriageable age, all of whom will get their shot at the fairytale happy ever after.

(250672)
$29.99 (as of September 30, 2022 16:40 GMT -07:00 - More infoProduct prices and availability are accurate as of the date/time indicated and are subject to change. Any price and availability information displayed on [relevant Amazon Site(s), as applicable] at the time of purchase will apply to the purchase of this product.)