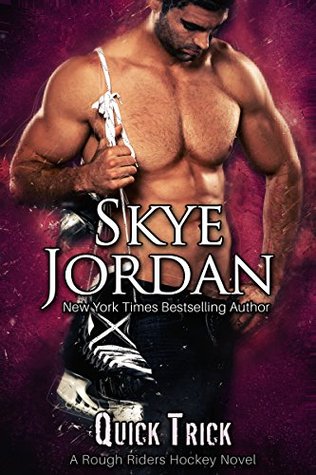 Infamous Rough Riders’ playboy Grant Saber has been sidelined for a bum shoulder. If he has to be off the ice for three weeks of recovery, he‘ll do it on his back—breaking in a new wanna-be cowgirl every night. But pressure from the team’s owner and Grant’s parents land him in his hometown of Holly, North Carolina instead. Things look up when he learns the hometown beauty who was once so out of his league is now single, and sexier than ever. Determined to slip in a night with her while he’s in town, Grant is shocked to discover one will never be enough.

Faith Nicholas has no interest in the newest Saber-son gossip. After losing her father just months before, she is now on the verge of losing their family hardware store—which is also her home. She couldn’t care less about the Saber’s big money or flashy toys. But she can’t seem to keep Grant out of her store–or her dreams. His magnetic charisma is impossible to ignore, and the longer he stays in town, the more she finds to love about a man who isn’t as superficial as he’d like others to believe.

With a struggling store, four-hundred miles and a rigorous hockey season looming between them, Grant will have to pull out his very best moves if he’s going to make this quick trick last forever.

(107112)
$34.99 (as of February 1, 2023 10:13 GMT -08:00 - More infoProduct prices and availability are accurate as of the date/time indicated and are subject to change. Any price and availability information displayed on [relevant Amazon Site(s), as applicable] at the time of purchase will apply to the purchase of this product.)