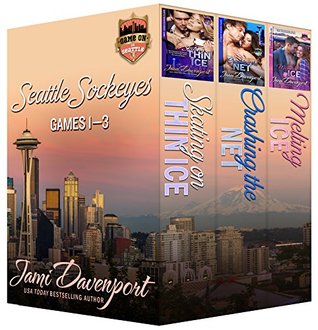 Get a front row seat as the Seattle Sockeyes hockey team plays their inaugural season in Seattle. Watch these hot hockey players fall in love and win the biggest games of their lives in this Game On in Seattle sports romance bundle by USA Today bestselling author Jami Davenport.

He trusts his gut, she trusts her numbers, and neither trusts the other, as a billionaire’s mission to bring hockey to Seattle clashes with his passion for the woman who holds his heart.

Professional party crasher, Izzy Maxwell, needs the cooperation of reluctant party guest Cooper Black, the team captain of Seattle’s new hockey team, but Cooper can’t get past his anger over the team’s relocation to Seattle. Can Izzy melt Cooper’s frozen heart or will this party crash along with her fledgling business?

As the Sockeyes hockey team opens their inaugural season in Seattle, Cooper finds himself minus a girlfriend and plus a surly teenage nephew. He enlists Izzy’s help to care for his nephew when he’s at away games. Neither of them wants their financial arrangement to turn back into a personal relationship, but love has a way of getting what it wants, no matter the circumstances.

Brimming with attitude and broken beyond repair, Isaac “Ice” Wolfe has a heart as cold as his nickname, and he likes it that way–until he meets his neighbor Avery Maxwell. When Isaac is warned away from Avery, he sees the writing on the wall. It’s Avery or his career. To Isaac, a life without hockey wouldn’t be a life worth living. But what about a life without Avery?

(8798)
$134.99 (as of September 30, 2022 16:40 GMT -07:00 - More infoProduct prices and availability are accurate as of the date/time indicated and are subject to change. Any price and availability information displayed on [relevant Amazon Site(s), as applicable] at the time of purchase will apply to the purchase of this product.)