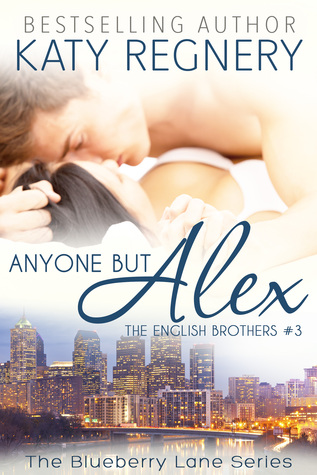 Anyone but Alex is the third of six books about the Philadelphia-based, wildly-handsome English brothers who are all on the look-out for love.

(Sort of. Barrett and Fitz are officially off the market, Alex has sampled every piece of available ass from Rittenhouse Square to the Liberty Bell, Stratton can’t seem to see what’s right in front of him, and don’t even get me started on Alex Pettyfer look-alike, Weston…)

Alex English, the well-known man whore of the country club set, has always preferred to play the field, eschewing a chance with Miss Right for a satisfying quickie with Miss Right-Now. But after seeing his two older brothers take the plunge, something has been aching inside of Alex, and no amount of casual sex seems to fill the void in his heart.

Jessica Winslow, whose older brothers are best friends with the English brothers, has returned home from a fifteen-year stay in England, only to find herself face-to-face with her childhood crush, Alex English, on her first night home. She’s heard all the rumors, but Jessie remembers the older boy who was so kind to her as a child, and can’t help reaching out to Alex in friendship.

Between disapproving brothers, scheming exes, and the biggest business deal of English & Sons’ illustrious history, Alex and Jessie’s budding romance is going to be put to the test. The question is…will it be strong enough to be their happily-ever-after?

(39448)
$249.99 (as of February 2, 2023 10:13 GMT -08:00 - More infoProduct prices and availability are accurate as of the date/time indicated and are subject to change. Any price and availability information displayed on [relevant Amazon Site(s), as applicable] at the time of purchase will apply to the purchase of this product.)