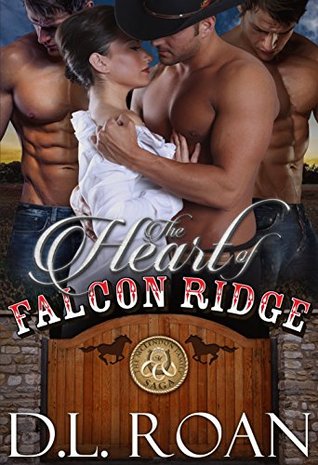 Three hearts beat as one, for one. Always.

“Everything inside him ached for Claira in a way that was completely unfair to the memory of his wife.” ~ Grey McLendon

Claira Robbins technically didn’t exist until two weeks before she began teaching at Grassland Academy. Her new identity may have given her the credentials she needed for the job, but it hasn’t helped one whit to soothe her frayed nerves caused by years on the run. It also didn’t come with instructions on how to handle three ravenous cowboy brothers intent on seducing her.

Six years after losing their wife, the McLendon brothers are focused on running their family ranch, Falcon Ridge, and raising their rambunctious twin boys. They’ve never believed they could find another woman with which to share their hearts and family.

When Matt and his twin, Mason, meet their sons’ classy new teacher, hope and love aren’t the only things that spring back to life. Matt is convinced she was Heaven sent to heal their family. Mason hopes he’s right, but knows they have a bigger problem than convincing Claira to take a chance on their unconventional family; a much bigger, surly, older brother kind of problem.

After their wife died, Grey McLendon planned to live the rest of his life comfortably numb from the neck down, even if it killed him…and it just might if he can’t reconcile his guilt and desire for Claira before her treacherous past catches up with her.

(16979)
$34.99 (as of February 5, 2023 10:29 GMT -08:00 - More infoProduct prices and availability are accurate as of the date/time indicated and are subject to change. Any price and availability information displayed on [relevant Amazon Site(s), as applicable] at the time of purchase will apply to the purchase of this product.)

Previous Post: « Some Sort of Love by Melanie Harlowe
Next Post: Made To Be His by Allison Gatia »