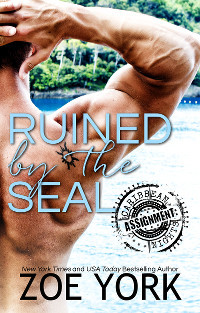 Mick Frasier owes his life to his fellow Navy SEALs. Now that he’s discharged, one of them offers him another lifeline: a new future on the Caribbean island of Miralinda.

But when he arrives at the abandoned sugar plantation he’s supposed to whip into shape as an executive training facility, he finds it already under renovations—overseen by the beautiful director of the island’s Historical Society.

Cara Levasseur is too young for her job. Too pretty. Too…unorthodox. She’s heard it all, and now that she’s finally secured Villa Sucre, she’s not going to let anything get in the way of her first big professional coup.

Not even a sexy, strapping ex-Navy SEAL who isn’t afraid to turn on the charm—or when that doesn’t work, declare all-out war. When she sets up camp in the ballroom, because there’s not a chance in hell she’s giving up her claim on the estate, Mick stakes out his own territory around the only working bathroom on the property.

With tempers flaring and passions running hot, Cara’s intent on not letting Mick ruin this opportunity for her—and she doesn’t want him to ruin anything, either. Her life plan, for example. Or her heart…

(102310)
$84.99 (as of January 28, 2023 10:48 GMT -08:00 - More infoProduct prices and availability are accurate as of the date/time indicated and are subject to change. Any price and availability information displayed on [relevant Amazon Site(s), as applicable] at the time of purchase will apply to the purchase of this product.)