And welcome to my new Saturday Feature – Steamy Saturdays!

On Steamy Saturdays, I’m going to post some reviews from romance novels that I’ve read, that are on the steamier side of romance.

A Kept Woman by Daryl Devore
ASIN: B004PGNB9C
Release: Feb 2011
Source: I received a copy of this book to read and review from TRR

Desperately unemployed, Arianne, answers an ad that reads Woman Wanted. With miniscule hours and excellent pay, she accepts the position of courtesan to Derek, a handsom

ely dashing man, whom she finds out is a billionaire. Engaging in a game of cat and mouse, will they drive each other crazy…or will they fall in love first.

A Kept Woman takes the idea of a classified ad for sex, gives it a unique spin and ends up with a winner.  This book has a fiesty underdog heroine,  a rich and pampered hero that needs a bit of molding and a great plot.  Definitely a must read!

Arianne has just been dumped by Kyle, her latest boyfriend and complains to her gay roommate, Taylor, that she hates men.  She blames them for the downturn in the economy that caused her to lose her job, and she hates them for the position that she is in!  Desperate for money and a job, she settles down with the paper and sees an add for “Woman wanted.”  There is an e-box number associated with the ad.  When she looks at the ad it reads : “Hi I’m Derek.  I’m looking for a woman.  I don’t want a girlfriend or a lover.  Just a mutually sexually satisfying companion. The work will be minimal and the pay will be excellent.  If interested e-mail me your name, and introduction – 100 words or less – and a photo to entice me to hire you.”  After thinking about it, she takes a picture of herself nude and writes up a little note.  She gets a response quickly, and arranges a meeting for the next Tuesday.

Derek is a multi-billionaire who is tired of women manipulating him.  He has a high pressure job as the CEO of the company he bought from his father and he decides one night after a particularly rough day that he just wants someone to screw once a week.  No questions, no relationship, no dates, no fuss.  What he finds in Arianne is someone who challenges him, who doesn’t allow him to get his way because of his money or his position.

A Kept Woman is a pretty interesting read!  On the surface, it’s somewhat offensive as Derek is essentially hiring a prostitute, and Arianne has become so desperate that she takes a job as his prostitute.  There is so much more to this story, however!  The author has created multidimensional characters that keep the story hopping right along.  The sex is pretty graphic, but it completely fits in with the storyline.  These characters don’t just fall in love as one would expect in a happily ever after.  There are many road blocks along their path to happiness!  The secondary characters are wonderfully crafted and provide an interesting dimension to the story.  The only issue I had with the story was a BDSM section part way through the story that I didn’t feel needed to be present for the storyline to still succeed.  With the exception of this particular part, this story is a page-turner that keeps the reader engaged and riding the ups and downs of the  plot from beginning to end!

Source : I received a copy of this book to read and review from TRR 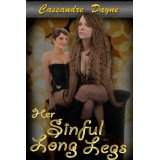 Brittany Cox faces a daunting task. Her lover, David, has every expensive toy money can buy. So, what kind of gift can she give the man who has everything? Brittany has no clue. But on a snowy winter night after a wicked round of sex, David admits that his fantasy is to have his friends watch as they make love. Developing a naughty plan of her own, Brittany decides to give David what he wants. But when the stretch limo she rents takes David and three of his closest friends to David’s secret birthday destination, a strip club, he’s horrified. As the guest of honor, David is given front row seat to the show. And when a masked vixen appears, David breaks the rules and touches the woman and before he knows it, he’s undressed and tied to a chair. Mortified that the dancer enlists the help of his friends from the audience, David refuses to enjoy the stunning woman. But the question remains… will Brittany ever forgive him or is there another secret to reveal?

Brittany Cox and David Miller steam their way from one page to another, raising the temperature in the room as well as fogging your glasses!  I think that sizzling hot and forbidden sex in Her Sinful Long Legs makes this the best erotica I’ve read in 2011!  Watch this author for more great things to come.

Brittany Cox is having a secret relationship with David Miller.  She’s been friends with him and several other guys, but none of the others know that they have become friends with benefits.  David is into voyeurism, but can Brittany throw her inhibitions aside to grant him a special birthday wish?

Brittany plans a special birthday party for her lover, David and these plans include their friends Bill, Carl and Mike.  All David wants for his birthday is to have sex in front of a group of people.  This night of his birthday, Brittany calls David and claims that she has to work, but encourages him and his friends to go ahead with the arrangements that she’s put in place.  With misgivings, David gets into the limousine and heads off to the strip club where he is met by a large group of his friends and acquaintances.  The masked woman who appears to entertain them is tempting, but David tries to resist her as he doesn’t want to be unfaithful to Brittany.  Eventually he can no longer resist temptation and gets the birthday present of his dreams.

Her Sinful Long Legs is a really well written erotica that grabs hold of the reader and takes them for a ride through the land of the forbidden.  The action is hot, and graphic, it is 55 pages of pure heat.  This book isn’t for the faint of heart.  It involves spanking, anal sex, group sex and voyeurism.  The author smoothly lays the foundation of David and Brittany’s friendship and subsequent carnal relationship.  The chemistry between the two sparks off the pages.  Of the two, David is the more adventurous and is constantly pushing Brittany for more.  The author clearly shows the trust that exists between them to allow for the furthering of their relationship.

I liked how the author managed to create an incredibly hot erotica that still had a happily ever after ending.  I would highly recommend this book!
Her Sinful Long Legs Purchase Link