a kiss to kid for 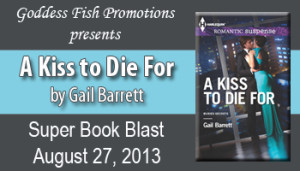 Today we are welcoming Gail Barrett to the blog! She is the author of A Kiss to Die For and is touring her book with Goddessfish Promotions. Gail will be awarding a $25 Amazon gift certificate and either a signed print copy (US ONLY) or an electronic copy of Fatal Exposure (Buried Secrets book one) to one randomly drawn commenter from the tour. To find more places to leave a comment, click HERE.

A Kiss to Die For
by Gail Barrett 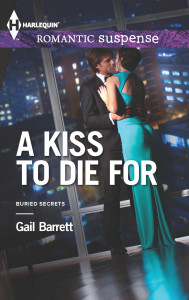 Homeless Army veteran Sullivan Turner is nobody’s hero.  His failure to save his fallen comrades proved that.  So when a gutsy social worker gets caught in a drug gang’s crosshairs, he knows he’s the last man who can safeguard her and the pregnant teenagers she’s trying to protect.

Former debutant Haley Barnes learned the hard way how to survive.  After witnessing a cold-blooded murder, the terrified teenaged runaway changed her identity and hid to save her life.  But when the killer tracks her down and attacks the girls in the homeless shelter she now runs, Haley knows the time has come to stand and fight.  But to bring down the powerful killer she must confront her high-society family’s darkest secrets — and convince wounded warrior Sully Turner he’s the hero she believes.

She tightened her grip on his waist.  His pulse slowing, he closed his eyes, feeling oddly at peace despite the danger hounding their heels.  Maybe it was because she’d suffered as much as he had.  Maybe because she understood how deep a loss like that could sear.  But he realized that he liked being around Haley.  He respected her.  Admired her.

He was falling for her.  Hard.

His stomach sank.  He had no right to pursue her.  He was the last person she needed, unsuitable in every way.  She needed someone who could protect her, defend her, not an unstable wreck like him.

And God help him, but he wanted to feel that again, that idealism, that drive to make a difference in the world, that need to battle the bad guys and keep the defenseless safe.

To be the man that he once was.

Gail Barrett is the award-winning author of thirteen romantic suspense novels.  A former RITA® and Daphne finalist, Gail has received the Book Buyer’s Best Award, the Holt Medallion, the Booksellers Best, The National Readers’ Choice Award, and numerous other awards.  She lives with her husband in Western Maryland.  For more information, visit her website: www.gailbarrett.com.

A Kiss to Die For can be purchased: