A Little Mischief by Amelia Grey
ISBN: 978-1-4022-3980-0
Re-release: August 2012
Publisher: Sourcebooks Casablanca
Source: I received a copy of this book to read and review by the publisher 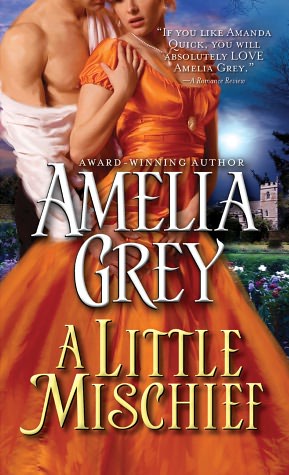 How can a lady avoid a scandal…
Just as Miss Isabella Winslowe is finally achieving comfortable respectability, the fascinating and decidedly unrespectable Earl of Colebrooke inconveniently appears…
When a gentleman is so determined to flirt…
The darkly handsome Daniel Colebrooke is intrigued and alarmed when an alluring young lady arrives at his door in need of assistance. In a moment of impetuosity, Daniel decides he must keep a close watch on Isabella, and what better way than to strike up a not–so–innocent fliration…
Together they’ll cook up more than a little mischief when a disappearing dead body and a lascivious scandal spins their reckless game entirely out of control.

I received a copy of A Little Mischief from the publisher to read and review.  This book is a re-release, yet one that I didn’t read the first time around.  Miss Isabella Winslowe has created The Wallflower Society in order to help some of the shy women who are trying to make their way in polite society.  She feels that she can help them gain much needed confidence through their weekly meetings and discussions.  Lady Gretchen Colebrooke is one of the spunkier members of the group, and when she finds herself with a dead body during one of the meetings, Miss Isabella intervenes by seeking Gretchen’s brother’s help.  Daniel Colebrooke knows trouble when he see it!  The fact that his sister appears distraught after supposedly seeing dead body at Miss Isabella’s house certainly classifies as trouble.  The trouble continues when he returns with Miss Isabella to deal with the dead body, only to find the body gone.  This is the start of a rocky relationship between Daniel and Isabella.  In this part mystery, part romance, part comedy, the characters keep the reader guessing as the clues are presented and laughing at the action.

Pick up a copy of this book and enjoy this cute little read!  I found it to be delightful!