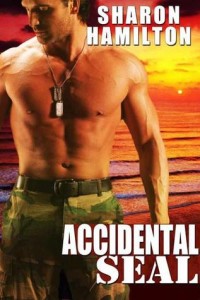 Christy Nelson embarks on her new career in Real Estate by holding her first open house. Entering the wrong house, by accident, she finds the nude sleeping body of a young man.Navy SEAL Kyle Lansdowne, on a mission to find his AWOL Team buddy, is staying at his buddy’s home while investigating the disappearance. When someone breaks in, he takes protective measures. He doesn’t expect to find that a beautiful young woman is responsible for his teammate’s abduction.What starts out as a meeting by accident becomes a hot affair neither one is ready for. Kyle is conflicted about getting Christy involved in his mission, but his hand is forced when he learns the same San Diego gang responsible for his teammate’s abduction has kidnapped her.Battling a cadre of dirty law enforcements hell-bent on getting military equipment, especially state-of-the-art firepower, Kyle is forced to admit that he would die to protect her.

Accidental Seal can be purchased from Amazon

Why do you need to read this book? Loved this book. This takes a military hero (Kyle) and sets him loose in the civilian world to find a missing friend using the skills that he learned in HIS world. I loved the protectiveness and determination to succeed. He made a great hero for Christy who needs something good to happen in her life. Pick up a copy!

The house appeared nicer than he’d described. The advertised price, he said, was the lowest in the neighborhood, going back ten years. Hopefully she’d pick up a young couple out looking for their first home, complete with good credit and a wad of cash from Mommy and Daddy. Wouldn’t it be great to make a sale on her very first day on the job?
She parked in the driveway, popped the trunk, and brought out three sandwich signs with the Patterson Realty logo, on loan from Wayne. He was out with his family today. She hoped the Somervilles didn’t stop by since she’d feel uncomfortable looking into the eyes of Wayne’s wife, a woman he probably cheated on and would again, if he got the chance. One of Christy’s other rules: no married men. She wasn’t about to change that, either.
A perfumed late spring breeze blew softly against her face and neck, sending a thrill up her spine. The air ripened with possibility. This was her favorite time of year.
The walkway looked freshly swept. After placing one sign in the front yard, she stacked the other two beside the front door and inserted Wayne’s key. While the lock accepted the new shiny silver metal, the tumblers stayed in place, frozen.
Way to go Wayne. Waste my time and give me the wrong key!
Irritation bubbled, ruining her cheerful, spring-induced mood. She yanked on the front handle and pushed against it out of frustration. It opened.
“Anybody home?” Her voice wavered like that of a small child. She waited. No answer.
Christy stepped inside, onto a striped cotton rug lying cockeyed behind the front door. The smell of fried food hit her. She walked across the wooden floor of the living room, her stilettos clacking. She cracked open a window. Air scented by fresh blossoms poured in, diluting the smells of ordinary life. She grabbed the newspaper tossed on top of an ottoman and folded the crinkling pages under her arm, aiming for the kitchen to find a trashcan. She passed the dining room table, which was strewn with a map of the area, a couple of felt-tipped pens, and a letter-sized yellow lined tablet. She collected these items as well and made her way to the kitchen.
Christy threw the tablet and newspaper onto the tiled countertop and placed her hands on her hips to assess the scene before her. She squinted at several days’ worth of dishes piled high in the sink. Next to it, a large stainless steel bowl sat encrusted with dark green and purple leaves at the bottom, evidence of a salad—several days old.
Maybe Wayne had neglected to tell the sellers about the open house. She decided it was entirely possible. “How can you expect to sell a house this way?” she muttered, then sighed and removed her jacket, slinging it over the back of a clean-looking kitchen chair. She decided to take a tour of the place, checking for other things to clean or straighten before she’d be ready to hold it open.
But this house was such a mess, an uneasy darkness chilled her. She tiptoed down the carpeted hallway, feeling like an intruder, past empty rooms, to a closed door at the end.
Probably the master bedroom.
Something about the whole scene was strange. These people left without cleaning up dinner from several days before, in a hurry. She’d been told short sale houses rarely showed pride of ownership, but this felt absolutely creepy, like she’d stepped on someone’s grave. The hair at the back of her neck bristled as she gripped the doorknob. She lightly tapped with her other hand, and then opened the door.
A naked body lay on the bed.
Holy crap.
Hesitant to look at first, she pushed through her fear. She saw movement. Tanned skin, a muscular male chest that rose and fell. Earphones were wired to a phone balanced on his open palm. The man was very much alive, and healthy. Her eyes drifted further down to a dusting of dark brown hair that led to an impossible-to-miss erection. His penis stood at attention, like a deep rose-colored light standard under a matching fireman’s hat of deeper pink.
Blood pumped to her ears, making them ring, as her heart raced. A wave of anger coursed over her at the realization she had been the victim of a very sick joke perpetrated by Wayne and one of his disgusting friends.
Christy silently closed the door and tiptoed back down the carpeted hallway, her three-inch heels wobbling on the thick, padded surface. Her knees knocked against each other as she picked up speed, her anger building. She grabbed her jacket, keys, and purse, and crossed the living room, headed toward the front door. She was almost free.
Christy wouldn’t give the prankster the satisfaction of knowing she had even seen him. She wanted to stomp her foot and kick something through the window. This was Wayne’s doing.
That sonofabitch and his lopsided plugs will pay for this.
She pulled the door handle and was rewarded by the smells of a warm spring day bleeding through the inch-wide crack she’d created. An enormous hand and forearm came from behind her and slammed the door shut. She saw a familiar blue-green tattoo of some animal tracks on his muscled forearm just before his other hand gripped her mouth. Callused fingers pinched the sides of her cheeks. The grip hurt.