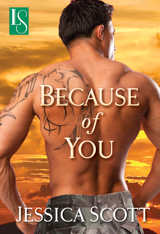 Blurb: Keeping his men alive is all that matters to Sergeant First Class Shane Garrison. But meeting Jen St. James the night before his latest deployment makes Shane wonder if there’s more to life than war. He leaves for Iraq remembering a single kiss with a woman he’ll never see again—until a near fatal attack lands him back at home and in her care.

Jen has survived her own brush with death and endured its scars. And yet there’s a fire in Shane that makes Jen forget all about her past. He may be her patient, but when this warrior looks her in the eyes, she feels—for the first time in a long time—like a woman. Shane is too proud to ask for help, but for Jen, caring for him is more than a duty—it’s a need. And as Jen guides Shane through the fires of healing, she finds something she never expected—her deepest desire.

I love the characters in this book – Jen and Shane are AWESOME!!

Because of You can be purchased at Amazon