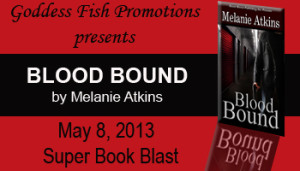 Today we are welcoming Melanie Atkins to the blog! She is touring her book, Blood Bound with the help of Goddessfish Promotions and is here to not only share some information about her book, but to give away one of her back list eBooks to a lucky commenter. To increase your chances of winning, click HERE to find the list of blogs that are involved in the tour and leave some comments. 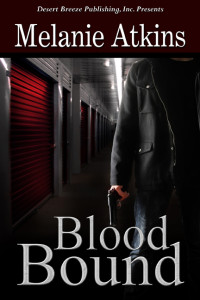 Fueled by grief after his fiancée is brutally murdered, Detective Sam Walker focuses on finding her killer — a calculating predator who binds books with human skin.  Dani Barrington, the newest member of NOPD’s Victim and Witness Assistance Unit and a survivor of another frightening attack, helps him discover the terrifying link between the monster’s known victims.  Despite his anguish, Sam is struck by Dani’s strength and determination, especially when her inquisitive  nature makes her the killer’s next target.  He must find a way to protect her or risk losing the one woman who can bring his dead heart back to life.

New Orleans Detective Sam Walker stood in the center of his fiancée’s cluttered bedroom and struggled to piece together the timeline of her disappearance. Last night they were supposed to meet for dinner, but he’d caught a case. They’d talked on the phone around eleven, and he’d asked her to meet him for lunch today.

He hadn’t spoken to her since.

She was supposed to arrive at the Victim and Witness Assistance Unit for work at nine a.m., but never made it. One of her co-workers had called him about ten o’clock. He’d tried Kristen again, but she hadn’t answered.

So he’d come here and found her car in the driveway.

Yet she sure as hell wasn’t here.

Her bed was meticulously made, the way she left it every morning, dumping him out if he’d stayed over. A damp towel lay beside the bathroom sink. Soulful jazz drifted from the iPod dock on her nightstand. What terrified him most, though, was the spot of blood marring the door frame and the lone pink sandal lying in the living room floor beside her purse, keys, and cell phone.

His heart lurched. He couldn’t breathe, couldn’t think. Simply could not absorb that she was missing. They’d been engaged for five months and three days, with only a month to go until the wedding. They should be mulling over the guest list, squabbling about where to go for their honeymoon, and deciding where they wanted to live.

Instead, Sam stared at an empty bed.

“There’s no sign of forced entry, so she either let the guy in or he jumped her when she went after the paper this morning.” Major Sabbatini’s voice seemed to come from far away. “I’m thinking she fought him off and ran, and he caught her here in the bedroom.”

“She would have clawed him.” Hell, she would’ve drawn blood with those nails. Sam should know. He had the marks on his back to prove it. Moisture blurred his vision as he eyed the smudge on the door jamb. “She… she just had her nails done a couple of days ago. They’re like talons.”

“We’ll check the blood for DNA. You know that. What were her plans for today?”

“Um… just work, far as I know. She and I were supposed to have lunch.” Sam shook his head. “Then tonight, she was going to a wedding shower. I just–”

“When was the last time you spoke with her?”

“Late — last night.” Sam’s eyes fell on a partially-filled mug on the table beside Kristen’s favorite chair, where she liked to read. A hard knot formed in the center of his chest. “She didn’t… even finish her coffee. She loves coffee.”

“You don’t know that.” Sam’s voice cracked. He turned to his boss. “What if I never see her again?”

Melanie Atkins a multi-published author of romantic suspense, an editor for an online publishing company, and an avid reader. Writing is more than an escape for her—it’s a way of life. She grew up in the Deep South listening to tall tales and penning stories about her cats. Now she writes gripping stories of love, suspense, and mystery with the help of her furry little feline muses.