Here’s another reprint from the Company of Rogues that takes us another step down memory lane…. 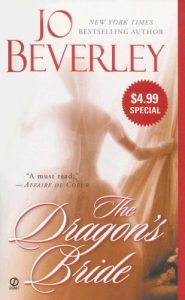 Con Somerford, Viscount Amleigh, is not pleased to have inherited the Earldom of Wyvern and the monstrous house that goes with it. He’s even less pleased when the first person he encounters there is Susan Kerslake with a pistol in her hands. Susan and he have a past, a bitter one. The years in between, however, have been years of war. That must, surely, have armed him so he can resist her, and deal with the smuggling with which she is clearly involved.

Although Con Somerford and Susan Kerslake knew each other for two weeks as teenagers, 11 years prior, they are brought together in The Dragon’s Bride – the next in the “Company of Rogues” series by Jo Beverley.  At the youthful age of 15, Susan and Con had a magical two week affair that ended when Susan rejected Con as she found out he wasn’t going to be the next Earl of Wyvern.  Through a series of events, Con is now the Earl and Susan is the housekeeper of the castle owned by the Earl of Wyvern.  Despite their history, Con and Susan find themselves drawn to each other with Con wondering if Susan is still only interested in him as she wants to be the Countess of Wyvern.  As our story proceeds we find out that David, Susan’s brother, who leads smuggling in the area and Susan have a history that we start to uncover.

I was attracted to this book as it was another in the series, but I have placed it near the top of my Jo Beverley books for her skillful handling of a complex plot line and imperfect, yet wonderfully endearing characters.  A plot line that involves the discovery of hidden marriages, peers that are off their rocker, and a castle with dragons that is involved in smuggling  are enough to be challenging, but once again, Jo Beverley provides us with book impossible to put down until the last page has been read!
Dragon’s Bride was a RITA Finalist

The Dragon’s Bride is available from Amazon 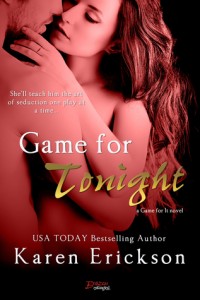 Publicist Aubrey Cooper never should have crossed the line. After all, pro football player Flynn Foley is her client. But something about this mouth-wateringly-hot, clean-cut athlete makes Aubrey imagine all kinds of X-rated fantasies. And it only takes one game-changing play―and one night―to turn the tables from strictly business to very, very personal…

Flynn has maintained a no-sexy-distractions policy for his entire pro career. Aubrey is exactly the kind of distraction he was trying to avoid, and she’s the one he can’t resist. When the media catches wind of their naughty little liaison, however, Aubrey’s boss steps in to make them an official couple. What Flynn doesn’t know is that Aubrey is forced to fake the relationship―or lose her job. Now Aubrey must hide the truth…even as she begins to fall for Flynn.

Game for Tonight can be purchased from Amazon

Why do you need to read this book? This is book 3 of a trilogy, but that aside, I loved this group of books about football players. Not a sport I’m at all interested and typically not a subject matter that I would  be interested in for a book, but I was hooked at book 1 and that interest carried through all three. Well written and engaging. 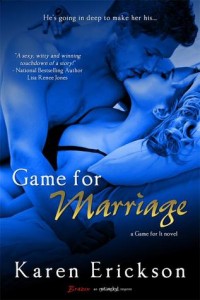 He’s going in deep to make her his…

Struggling artist Sheridan Harper never imagined she’d spend a sizzling night with Jared Quinn, the smoking-hot star quarterback of her local professional football team, the San Jose Hawks. And she’s even more shocked when Jared’s publicist offers her a proposition: a fake marriage to keep Jared out of the gossip mags. Being that close to Jared would be too tempting, so to protect her heart, she insists on secretly including a clause forbidding sex between them.

Jared just wants to keep his starting QB job and keep it in San Jose. His reputation as a ladies’ man has landed him in the headlines one too many times, but there’s something about his kind, passionate new wife that tempts him beyond reason. Any sort of intimacy between them is completely forbidden, but as their bodies fall in deep, will their hearts follow suit?

Game for Marriage can be purchased from Amazon

Why do you need to read this book? If you are a fan of steamy Football/Sport romances this is the book for you! Hot, fast paced and great storyline!