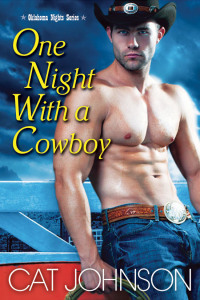 One Sweet Ride…Oh yeah. A single look at the leggy blonde in the stands and Tucker Jenkins is ready to buck all night long. It’s time to forget all about his cheating ex and his usual hands off policy.One Hot Night…Becca Hart is an East Coast professor. Not a buckle bunny. But no degree can prepare her for the moves of the sexy bull rider she hooks up with at her first rodeo … Or the shock of finding him at her first Oklahoma State University staff meeting.One Happy Ending…Tuck knows it’s all about holding on, no matter how wild the ride. Now he just has to convince Becca that a rough start out of the chute doesn’t mean they aren’t a smokin’ combination …

Why do you need to read this book? I like what the author did with these characters. This isn’t the story of a buckle bunny and a cowboy, it is the story of a strong intelligent woman who challenges a cowboy. Excellent read!

One Night with a Cowboy can be purchased at Amazon

“I have a room with a king-sized bed available. Will that be all right?”

“Perfect.” Tucker shot her a smirk and she felt her cheeks heat.

How many more embarrassing questions could this desk clerk ask? There couldn’t possibly be any more. He’d pretty much covered everything he could to humiliate her.

Yes, only one night. Yes, the bigger the bed the better. Yes, we’ll be having lots of sex. Thank you for asking.

“Do you need help with your luggage?”

She nearly choked as the hotel employee managed to come up with one more thing she hadn’t even considered.

No, no luggage. Just sex.

“No, thanks. We’re good.” Cool as a cucumber, as he had been through the entire check-in, Tucker picked up the pen and signed the paper the clerk had pushed toward him.

“We’re all set then. Check out is eleven, and elevators are to your right.”

“Great. Thanks.” Tucker slid the signed form back and took the keycard from him. After slipping the small piece of plastic into his back pocket, he took her hand in his and turned toward the elevators.

At least that part of the night was over, but even though she couldn’t wait to get out of sight of the lobby and the front desk, Tucker moved at his usual pace. Something between an amble and a stroll. It would be very atmospheric in an old Western movie. Here and now, it made the New Yorker in her cringe as she fought the urge to sprint—or at least power walk—to their destination.

When they finally reached the elevators and were out of earshot of the clerk, she turned to glance at Tucker. “I’m so embarrassed.”

He frowned down at her from beneath his ever-present cowboy hat. The bad-girl side of her—the one she hadn’t known existed until Emma forced her to go to the rodeo to look for cowboys in the first place—couldn’t help wondering if Tucker normally took his hat off to have sex or if he left it on. It was like a fist to the stomach when she realized she’d know one way or the other very soon. Wow.

“Embarrassed about what?” he asked, knocking the image of him, naked except for his hat, out of her spinning brain.

“He must know why we’re here. What we’re doing.” Even though there was no one nearby, Becca kept her voice as low as humanly possible.

“You mean that we’re checking in to have sex?” He leaned toward her and hissed the last word in an exaggerated whisper tinged with a laugh. “Becca, why would he assume that?”

“Because it’s practically the middle of the night.” She opened her eyes wide. Jeez. It was so obvious.

“So? We could just as easily be two weary travelers looking for a place to rest on a long journey.” The smirk on Tucker’s face told Becca he was enjoying this a little too much. She, on the other hand, was not.

She frowned. “We don’t look like travelers. We don’t even have any luggage.”

“You’re so cute being embarrassed. Just because we don’t have luggage.” He smiled and ran one hand up her arm. “If you want, I can go get my gear bag from the truck and carry it past the front desk so he thinks it’s our overnight bag.”

“No.” She rolled her eyes at his suggestion. “That won’t work.”

“Because this is Oklahoma, the rodeo state. He’ll probably know it’s full of bull stuff and think we’re doing kinky things upstairs with it or something.” She felt the scowl settle on her face at the thought. Best to leave it alone and cut their losses.

“First of all, Oklahoma is the Sooner State, not the rodeo state. But besides that, I’m trying to imagine what kind of kinky things we could possibly do with the bull stuff in my gear bag.” Tucker raised a brow. “I suppose we could get creative with the tape I use to wrap my wrist. There is the cowbell hanging on my bull rope… Although unless you’re into some really weird kind of role playing, that won’t be of much use.”

He grinned as her cheeks grow hotter.