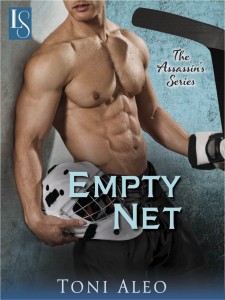 In Toni Aleo’s third novel in her hot Assassins series, the chiseled men of this Nashville hockey team can make anything happen when they go all out for the women they want—even turn a one-night stand into a happily ever after.

Audrey Parker is up against the boards. She’s stuck in a job she hates and pining for a total jerk. Meanwhile, her sister Fallon is moving out and getting married to hockey star Lucas Brooks. Where is Audrey’s Prince Charming? Nothing she does has ever seemed to be good enough for any of the men in her life. Audrey’s about to hit rock bottom . . . until she wakes up next to Tate Odder.

The thrill of moving up from the minors to the Nashville Assassins was a welcome distraction. But not even becoming the first rookie goalie to tally three shutouts in the Stanley Cup finals alleviates the pain. With the loss of his parents and sister weighing as heavily on his soul as ever, Tate Odder can’t keep pretending he’s okay. That’s when he meets smart, sexy Audrey. Her gentle warmth and quirky sense of humor make him feel whole for the first time in too long. But to stay that way forever, Tate must find a way to accept his past and learn to live for love.

Why do you need to read this book? Although I wasn’t totally taken with the heroine, Audrey from this book – I thought she was too wishy-washy – I LOVED Tate! He was an absolute prize! There are a lot of great aspects to this story, but Tate is the icing on the cake! Pick up a copy and let me know what you think!

Empty Net is available from Amazon

As Audrey made her way to the bar from the dance floor, all she could think was that the night was amazing. Audrey was so drunk that she hadn’t thought of Levi once. She was too busy having a blast with her sister and their friends. With the music pulsing around her, she leaned against the bar, and ordered another round of drinks. As she waited, her eyes slowly closed as the pain, unexplainably started to rip through her. Even though she hadn’t thought of Levi while being with her friends, he was heavy on her mind as she stood alone. Audrey’s heart ached and she dreaded going home. She knew he wouldn’t be there tomorrow when she got there, and that alone made her want to die inside. No matter how much alcohol she drank, or how much fun she had, it would all be over tomorrow and then she would be all alone.
“Someone as beautiful as you shouldn’t be sad.”
Audrey looked over, and then up, her eyes locking with a pair of ocean blue eyes that were looking down at her. She blinked twice as she took in the hotness that stood beside her.
He was magnificent.
A strong square jaw bone, covered in blonde stubble from not having shaved. His top lip was thin, while his bottom jutted out a little just waiting, begging to be bit. His hair was in a messy, tousled, cut and it reminded her of the sparkling vampire she often fantasized about.,. While Flightless Bird by Iron and Wine instantly played in her mind, her eyes drifted down his thick neck that attached to a pair of even thicker shoulders. He wasn’t skinny but he wasn’t built. He was in between and sexy. His nose had a very pronounce bump but it didn’t matter because when Audrey’s eyes met his again, she couldn’t breathe. Sex surged out of his pores and Audrey couldn’t believe how quick she became turned on just by looking into his eyes. His eyes were bright and sweet but hot all in one. She could get lost in them. She blinked a few more times before croaking out, “Excuse me?”
The side of his mouth tugged up bringing her eyes to his mouth. She watched as his beautiful lips moved, “I was wondering why someone so beautiful, looked so sad.”
Her eyes left his mouth to gaze into his eyes and she smiled, “I’m not sad,” she lied.
“Yes, I can tell,” he said and Audrey’s smile remained.
He had an accent.
Accents were sexy.
“I’m fine. My sister is getting married, that’s probably why I look sad.”
He shook his head, “Isn’t a wedding a good thing?”
Audrey smiled, “Of course it is, but I’m losing my sister.”
The guy nodded, “Yes, but you are gaining a brother.”
Audrey’s smile grew as she gazed up into his bright blue eyes. He was tall, really tall, and Audrey liked it. She liked that he was so much bigger than she. She had always been with little guys since she was so short but at that moment she was liking the giant that stood in front of her. “I think you’re right.”
He chuckled, a deep throaty sound that made Audrey’s girly parts scream. Oh, he was sexy. “I am always right.”
Audrey giggled at his cockiness. It was totally something Lucas would say, and thinking of him made her smile. She nodded her head before looking back up into the giant’s eyes, “Is that right?”
“Yes, I’ve been watching you all night and I am sure I was right to come and talk to you because honestly, you are the most gorgeous woman I have ever seen.”
Oh, wow.