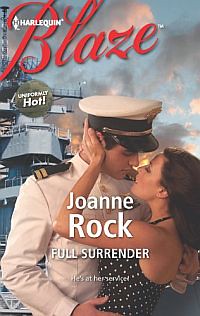 It’s a heck of a risky shot. But five years after an ordeal in Iraq, camerawoman Stephanie Rosen’s mojo has gone MIA. There’s only one place she’ll find it…and that’s with the onetime fling who set her fantasies–and panties–ablaze five years ago!

Lieutenant Daniel Murphy’s nights at sea have been haunted by dreams of Stephanie and the brain-melting chemistry between them. Now he’s on leave, and when Stephanie asks him to resurrect her long-lost libido, Danny doesn’t think twice. Now he has twenty days to remind her what she needs. Twenty days to take his time and drive her to the edge.

Full Surrender by Joanne Rock starts with the arrival home of a boatload of military types.  Lieutenant Daniel Murphy is one of the last ones to disembark as he is certain that there is no one there to meet him.  He has made arrangements with his family to leave him along for a few days.  He is surprised to see  the woman who won’t leave his dreams standing waiting for him, looking just like she did 5 years ago when he last saw her.

Stephanie Rosen first met Daniel in a bar.  She was soon heading overseas to get some experience with an international photo crew.  Little did she know, she would be kidnapped and prompt Daniel’s enlistment into the service.  Now, so many years later, she is looking for Daniel to jumpstart her mojo.

Like most of the Blaze novels that I read, this one was great! These novels fit in my purse and give me something to read while kids are having activities. I haven’t met a Blaze that I don’t like 🙂 I’ve included an excerpt below to give you a glimpse of the story!

The USS Brady cruised into Norfolk, Virginia, at 10:00 a.m. EST, right on schedule. The navy destroyer ship had been deployed for six months, but for Stephanie Rosen, the homecoming had taken five long years.

A military marching band played at the front of the pier, near the ship’s ramp. Flags and banners fluttered in the late summer breeze while overexcited kids crowded the gate for a first glimpse of their arriving moms or dads. A refreshment tent overflowed with reuniting couples and families. But Stephanie had yet to spot the man she’d been waiting for. The man who had no idea she’d be here today.

“I’ve been crying all morning,” a woman next to her confided, dabbing at her eyes with a tissue. Smiling through the tears, the older lady searched for her grown son, a fact Stephanie had discovered during the long wait for the sailors. “It’s crazy to cry, but I’m so happy I can hardly stand it.”

Touched, Stephanie squeezed the woman’s arm. She felt more comfortable waiting with a mom than with some of the wives who were dressed in their sexy best despite the early hour. It was apparent a lot of the reuniting couples had seduction on their minds.

“Happy tears are the best tears.” There had been a time when Stephanie hadn’t been able to cry at all, her emotions closed off after a long, mind-numbing ordeal. These days, she was grateful for the return of her emotions.

Now it was time for the return of her snoozing sensuality, the final phase of her recovery from that dark time five years ago. And there was only one man she trusted with the job. A man who’d been honorable and courageous well before his navy days.

“Oh, my God, there’s my son!” the woman next to her shouted, her voice hoarse with emotion as she launched toward a handsome seaman in dress whites.

Leaving the pair to their reunion, Stephanie stepped closer to the front of the pier as the crowd thinned just a little. She’d noticed that, while some families lingered to enjoy the festivities, most hastened to their cars to catch up privately at home. She had an exit strategy to combat the traffic just in case she could convince Danny to come home with her.

Nervousness fluttered in her belly at the insane plan. She hadn’t spoken with him in years. She wouldn’t even have known his status now—still single, thank you, God—except that she’d gathered her courage to call his mom in Cape Cod for an update, begging Colleen Murphy’s discretion about her inquiry. But his mom had been totally gracious, saying she was grateful that someone would be on hand to greet Danny when he docked in Virginia while his family prepared a reunion for him back home in Massachusetts.

Adjusting the red hibiscus in her hair, she lifted a hand to shade her eyes and scanned the faces of the last few officers exiting the ramp. She didn’t expect an overly joyful reunion with a man she’d only known for all of five days before she went overseas for her former career as a camerawoman. After all, she and Danny had agreed their relationship would be short-term from the moment they’d met. He’d probably wonder what on earth she was doing here.

“Danny, where are you?” Stephanie asked herself, wandering aimlessly through the happy crowd, the full skirt of her polka-dot dress swishing around bare calves. Her outfit was a nod to Donna Reed in From Here to Eternity, the fifties film that was the extent of her navy knowledge.

And then, just when she decided he must have flown back separately, Stephanie saw him.

She didn’t need to see the details of his face even though he stood almost two stories above her on the ship deck. An officer in dress whites moved to the top of the ramp, possibly the last man off the USS Brady. White wheel cap on his head and ribbons on his chest, he walked with more power and purpose than the laidback guitarist she’d met five years ago at a house party. And yet she somehow recognized the way he moved.

Or maybe she simply recognized a bolt of lightning when it hit her, just as it had so long ago. Her skin tingled. Her body froze in place. She doubted her ability to speak.

The man—or the memory of him—who had gotten her through hell and back even though he didn’t know it. Now, she just needed one more favor from Danny Murphy, and it promised to be the most awkward request of her life.

Dress shoes clacking on the steel bow ramp, Danny Murphy barely saw the crowd of people still milling around the pier below. He’d waited to disembark in the hope of avoiding the worst of the scene. Most of his buddies were hooking up within an hour of arriving back home, the sprint to their women almost laughable if it wasn’t so damn relatable. Imposed celibacy was a drag, but right now Danny told himself he was most interested in sleeping for seventy-two hours straight. His family knew he liked a few days to himself to acclimate to life on land before he had to be social, and for the first time in his naval career they’d respected his wish.

Of course, half the reason they’d been so accommodating was because they were busy getting ready for a Murphy-family wedding back home in Cape Cod. In the last year, his brothers had all found true love.

He wasn’t looking forward to treading through their happy world as a single guy. A single guy still messed in the head thanks to…

He nearly tripped, ass over fancy white cap, at the sight of the hot brunette at the ramp’s end. A woman who’d materialized the instant he’d thought of her. It was the woman he’d been fantasizing about. Right here in Norfolk.

She looked so good, he figured she must be a mirage. She wore a sexy black-and-white polka-dot dress that showed off her tiny waist. Wide shoulder straps and a modestly low neckline framed a heart-shaped locket more than her cleavage, but then again, her curves weren’t exactly disguised. She’d pinned a big red flower in her hair, the bloom tucked behind one ear so that a petal brushed her forehead.

“Hi, Danny.” The vision spoke as he got closer, making him certain she wasn’t a mirage.

All vestiges of tiredness fell away.

He reached the end of the ramp and couldn’t go a step farther unless he wanted to wind up in her arms. Which he did. But he would not allow that to happen no matter how good she looked right now.

She’d gone to Iraq with his cousin, a reporter, to film a series for an online news magazine. But she’d been kidnapped and held captive for six weeks.

Sometimes he still woke up thinking she was still over there and he had no way to find her. His legs would be tangled in his sheets and he’d be sweating like a son of a bitch. Memories of her, and leftover guilt that he hadn’t been able to help, had sabotaged every relationship he’d had since.

Even now, he wasn’t sure if he trusted that she was here. He sure as hell didn’t trust his knees to keep him on his feet.

Eloquent as a damn elephant, that was him. He tried to shake off the shock of her appearing out of the blue.

“You, too.” She smiled and five years fell away.

It was almost like meeting her for the first time, back before the nightmare of her abduction started. That is, until a new fear clocked him between the eyes.

“Are you, er, looking for someone?” He glanced around the pier, wondering if she was seeing a guy who had served on the USS Brady with him. What if she was meeting someone else?

“I was looking for you.” She bit her lip and now she was the one whose gaze darted around the people nearby. “Unlessyou’re meeting someone? I don’t mean to get in the way of anything.”

“No. God, no.” He shook his head, relieved that she was here for him. But damn. Why would she seek him out now, after all this time? “I’m just surprised you’d be in Virginia. Last I knew, you were living in Long Island.”

He’d been to her town house there, in fact. After they’d met at a friend’s house party in Brooklyn, Danny had gone home with her and spent the next four days at her place. They hadn’t been apart for more than five minutes at a stretch during that crazy, awesome time together. They might have had a future if she hadn’t been headed overseas for an extended assignment. Instead, they’d just parted ways, wishing each other well, never realizing how her life was about to implode.

“I moved to D.C. a couple of years ago, so I’m not all that far from here. I started a new pet-photography business out of my home. I just. .really wanted a fresh start.”

She didn’t need to say why. The memory of seeing her face on the news a couple of months after she’d gone to Iraq on assignment was burned into his brain. It had taken every ounce of self-restraint he could manage to join the service instead of trying to board a plane with a weapon and hunt down her captors himself….