Her one night prince 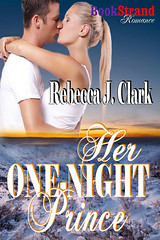 Blurb: Her One-Night Prince is a Cinderella story about a woman’s dream to be something she’s not for just one night at her class reunion.
As all fairy tales go, however, happy endings don’t come easily.

Shy and sheltered Lydia St. Clair is uncomfortable around men, so she advertises for a gay man to be her date and revamp her style. Mitch Gannon answers Lydia’s ad, and he’s perfect for the job—he’s handsome and, even more important, he’s charming.
Unbeknownst to Lydia, Mitch is straight and answered the ad as the unwitting victim of a practical joke. Before he can reveal the truth, Lydia is convinced he’s her fairy godmother, ready to transform her into the belle of the ball. And Mitch, prince that he is, doesn’t have the heart to set her straight.

Lydia St. Clair is determined to go to her high school reunion, but doesn’t want to go alone.  Since she’s determined that she’s the worst judge of men ever, and doesn’t even want to think about getting another boyfriend, she places a personal ad for a gay man to be her date.  Seemed like a good idea on the surface, but she didn’t anticipate being attracted to Mitch Gannon, who answered her ad.  What she doesn’t know is that Mitch was dared to answer the ad, and isn’t gay at all.  Once Mitch determines that she really needs him, he’s unwilling to let her know that he’s not gay, and that this whole thing started as a practical joke.

This is a great short story.  Although it is only 120+ pages, it feel like a full novel.  It is set on an interesting premise – how would you react to a date with a man who you think is gay.  Is it easier to be you when the hopes of something more are removed?  I liked this story and the characters that told it.  Lydia is someone who has dated a bunch of jerks, and needs to find a decent guy.  Mitch is tired of the same-old same-old and is taken by Lydia’s story.  It’s interesting how this story starts so simply, needing a date to a reunion, turns into something more.  So delightful!

Her One Night Prince can be purchased at: Amazon