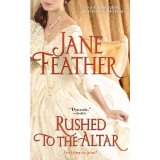 From New York Times bestselling author Jane Feather comes the first of a wonderful new trilogy, The Blackwater Brides, set in the sensually im-proper Georgian period, in which three noble brothers discover they will be forced to find brides under highly unusual circumstances.

Jasper Sullivan, Earl of Blackwater, needs a prostitute. Not in the usual way, however. His wealthy uncle’s will promises to divide his huge fortune among his nephews if each rescues a fallen woman . . . by marrying her! And since Jasper’s estates were already mortgaged to the hilt before he inherited them, when he catches a pretty young prostitute trying to pick his pocket, he immediately makes his proposal.

Clarissa Astley is not at all what Jasper believes. The orphaned daughter of a prosperous merchant, she is searching the seedier districts of London for her young brother, abducted by their evil guardian, who wants the little boy’s inheritance. But she needs powerful help, and the darkly handsome Earl of Blackwater is certainly that. So she pretends to be exactly what he assumed – a risky charade for an innocent virgin. But when passion flares between Jasper and Clarissa, the deception becomes even more difficult to handle. . . .

Rushed to the Alter is the first book in Jane Feather’s latest series (Blackwater Brides). I have been eagerly anticipating this book and was delighted when it finally appeared in my mailbox!

This latest series of books by Jane Feather have an interesting premise. All three brothers must marry and redeem “fallen” women in order to inherit their uncle’s massive fortune. Said uncle, Viscount Bradley, is a thoroughly dislikable man! He was an unrepentant libertine in his younger years, but because he is dying, he has decided to “repent” in order to die in peace. Sadly, he has commissioned a theology student to write his memoirs – his confession of a sorts.

This first book is about Jasper Sullivan, the Earl of Blackwater. Jasper is the eldest of the Viscount’s nephews and desperately in need of money as he has inherited an Earldom wallowing in debt. He needs to find a bride so that he can get his share of the money! Clarissa Astley is not what she seems. She is living in an attic room of a whorehouse while she searches London for her brother. Her brother was taken away by her evil gambling uncle and she has reason to believe that he has been dumped somewhere. Clarissa literally runs into Jasper while trying to follow her uncle and he assumes that she is a prostitute when she convinces him she isn’t a pickpocket. Voila, Jasper has found his prostitute to save! I won’t go into details about the rest of the story as I don’t want to ruin the story for those who want to read it!
I liked Jasper as a hero! He was somewhat flawed in his dissolute ways. And predictably male in many ways. Is that a sexist comment?? What I mean is he reacts in anticipated ways to certain situations. A young woman in London unaccompanied, must be of low repute. She lives in a whorehouse, she must be a whore, etc. He is guilty of not looking below the surface to see what Clarissa is hiding. Clarissa is leading a double life, trying to find/rescue her brother and trying to pretend to be a prostitute. At times the plot almost seemed vaudeville in it’s comedy of actions!

Over all, I liked the pacing of the story. The chemistry between Jasper and Clarissa was hot! Clarissa’s uncle was suitably evil and deserved what he got. Jane Feather did a wonderful job of writing Jasper’s uncle as a dirty old man! I could just picture him in my mind as I was reading the pages. Was there lapses in believability – maybe a few, but overall, a rollicking good time! I’m looking forward to the next two books.

RTReviews gives Rushed to the Alter 4 stars and says: “Feather gives an overview of Covent Garden, bordellos, pickpockets, Cyprians and the sights and smells of the place along with the aristocratic and not so aristocratic side of bawdy Georgian England in this nicely crafted start to The Blackwater Brides trilogy.”

Romance Junkies gives this book 4.5 stars and says: “Jane Feather delivers an ingenious storyline, witty prose, and charming characters (even the more errant are sure to catch your attention). I really became intrigued by the unique stipulation for inheritance presented to the Blackwater gentleman and can’t wait to see how the brothers’ stories unfold. Ms. Feather gives us another entertaining, well-written addition to the historical romance genre.”