Today is a giveaway and review for Tall, Dark and Cowboy by Joanne Kennedy.  This is a book that I got from Sourcebooks to read and review.  Yes, I was encouraged to read this book by the yummy man on the cover 🙂

Tall, Dark and Cowboy by Joanne Kennedy
ISBN: 978-1-4022-5144-3
Publisher: Sourcebooks Casablanca
Release: November 2011
Source: I was sent a copy of this book to read and review

She’s trading in her Luxe lifestyle and heading for Wyoming…

In the wake of a nasty divorce and with her ex’s vicious cronies bot on her heels, Lacey Bradford heads for  Wyoming in search of an old friend.  But her high school pal Chase Caldwell has changed, hardened by bitterness and loss.  He’s considerably less than thrilled to see the girl who once broke his heart – especially when Lacey turns up on his doorstep asking for help.

As the two grapple with the ruins of their former friendship, a brand new, surprising attraction ignites.  Lacey is boldly beginning to create a new life for herself.  And Chase has to admit, he’d rather be part of that life than be out in the cold alone…

Tall, Dark and Cowboy is yet another sensual cowboy romance from Joanne Kennedy.  I continue to enjoy this series of romances that she is writing!  The salacious part of me wants to point out the totally yummy cover!  Please take note!

Lacey Bradford is wanting to escape the mess that she is currently in!  She is now divorced from her husband, who has been arrested for his illegal real estate dealings.  She can’t get a job because everyone in town thinks that she knew about her husbands deals and blames her for the money and land that they lost as a result.  To add to the situation,  Wade Simpson, the cop that worked some deals with her husband is threatening her.  She needs to leave town and start her life over again!  After checking Facebook, she locates a friend from high school and hops in the car hoping that he will give her a hand starting again.  What she doesn’t remember, is one night getting really drunk in high school and kissing her friend, Chase Caldwell.  Chase spent most of high school being Lacey’s friend, but secretly in love with her.  That night when she kissed him, he thought they were going to be a couple.  His heart was broken when she announced her engagement to Trent Bradford.  Now it’s several years later.  Trent caused Chase’s father to lose his farm, and Lacey needs help that he really doesn’t want to give.

This is a rewarding romance that is slow to start but has a rewarding end.   I honestly didn’t really like the beginning of this story.  I don’t like the storyline of a girl going to someone she hasn’t talked to in years and asking for help getting her feet on the ground.  She comes off as lacking in independence.  I continued reading and the story got better and better.  The character that I really didn’t like at the beginning, Lacey, grew and developed as the story moved along.  She became a character that I loved by the end of the book.  The same is true of Chase to a certain extent.  He had faced alot of hardships growing up and I supposed had the right to be bitter, but he was not even civil to someone he supposedly admired in high school.  Again, as the story progressed, he changed and grew and became a character that deserved the title of hero.  I liked the sparks that flew between Chase and Lacey!  The interaction between them moved the story right along!  Ms. Kennedy’s writing style is comfortable to read, allowing enough description without bogging the story down.

Over all, this is a book that I enjoyed.  Give it a try yourself!

If you are interested in winning a copy of this book, just fill in the form below! 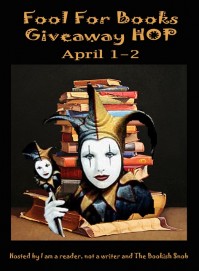 Welcome to the Fool For Books Giveaway Hop

This hop will be a short one – only two days – from April 1st to April 2nd.  The contest will be shut down at midnight on the 2nd.  There are over 200 blogs entered for this contest, so get busy and hop from one blog to another to win a whole bunch of stuff!  See the list of blogs below and start hopping!

Let’s talk about what I’m giving away.  First off, I am giving away my ARC of Cowboy Fever

by Joanne Kennedy.  I posted a review of this book just yesterday.  Click Here to see my thoughts on this book. This book comes off as a simple contemporary romance, but there is so much more to it!  A very enjoyable read!

The next book up is Honeytrapped by Justine Elyot.

This little short story is an erotica so it can only go to someone over 18!  It’s a hot little story and you can view my thoughts on it Here.

The third prize is a $10.00 Gift Card for Barnes & Noble (or which ever retailer suits you best).

The 4th prize is pretty exciting!  I’m giving away an ebook copy of Flat-out Love by Jessica Park.  This book hasn’t been released yet, and is so new, it doesn’t even have a cover yet!  Part of the blurb reads: Flat-Out Love is a warm and witty novel of family love and dysfunction, deep heartache and raw vulnerability, with a bit of mystery and one whopping, knock-you-to-your-knees romance. Drop by my blog tomorrow and I’ll have a post on the book as well as it’s author!

So…in order to enter the giveaway, you need to fill out the form below.  You must be  a GFC follower.  You can get extra entries by following me on Twitter (+1), Facebook (+10) and you can get 5 extra entries if you tweet about this contest!  Although comments are required for this contest, they sure are appreciated!

Fill out the form below.

This contest is now closed!

Good luck to everyone who enters!

Here’s the list of the blogs that are participating!  Happy hopping!

She thought she had it all….
A modeling contract with Wrangler got this Miss Rodeo a first class ticket out of town, but somewhere along the way Jodie Bryce lost her soul.  When she gets back to her hometown, her childhood friend Teague Treadwell’s rugged cowboy charm hits her like a ton of bricks….

He believed he wasn’t good enough….
Teague is convinced Jodie’s success lifted her out of his reach.  now he’s got to shed his bad boy image to be worthy of the girl next door….
But whoever heard of a beauty queen settling for a down and dirty cowboy….

Jodie Bryce is coming back to Purvis, Wyoming.  The town that she left as Miss Rodeo, she’s coming back to as a riding therapist.  She is hoping to use the ranch that was essentially abandoned when her dad died, to open a non-profit riding therapy program for special needs kids.  She used her time away modeling for Wrangler to attend school and get ready to follow her dreams.

The thing about small towns, is that everyone knows everyone.  When Jodie arrives back in town, she runs into Darla the town’s biggest gossip who declares she looks sick – maybe cancer – and her childhood friend Teague.  Teague is the bad boy from the roughest family in town.  His father was a wife beater and Teague got in all sorts of trouble growing up.  Boy, has Teague cleaned up good!

Jodie and Teague immediately feel that attraction that existed before Jodi left. The following exerpt says it all!

“Jodie had felt something pulling her toward Teague from the moment she’d seen him at the Rexall and now that they were alone the attraction intensified to the point where she wasn’t sure she had a shred of free will left.  One more second of silence, one more touch of his hand, and she’d drag him over to that bed and rip his clothes off.

The thought made her squirm inside, and something reckless swelled up in her heart.  What the hell was wrong with acting on your impulses once in a while?  She wasn’t an eighteen-year-old anymore.  More important, she wasn’t a virgin anymore.  Teague had see to that the last time they’d been together in his bedroom.  She wondered if he knew he’d been her first.

But the main thing was, she was a woman now.  She’d had casual relationships.  She’d learned to separate sex from love and enjoy it for its own sake.

So what the hell? Why not?
She hiked up on her toes and touched her lips to his.  The moment she did it, she knew she’d made a mistake.”

This book comes across as a simple, pretty clean romance.  It’s more than that.  Yes, the romance is present and the love scenes between Teague and Jodi are pretty steamy with out being at all graphic.  This story brings in Troy, Teague’s older brother who has Down’s Syndrome.  The book talks about all the things Troy CAN do, without focusing on what he can’t do.  It talks about the prejudices that Troy, Teague, and Jodie encounter.

I like this book on many levels.  It was on the surface a wonderfully gentle romance.  Essentially childhood sweethearts finally being at a point in their lives where they can explore an adult relationship.  It discusses the death of a parent and atoning for poor behavior during a time of grief.  It even deals with small town mentalities and outsiders that don’t fit in.

At first when I finished this book, I felt that it had gone on too long.  The story should have stopped about 75 pages before it did.  I put it aside and thought about it for a few days, and came to the conclusion that I was wrong with my initial thoughts.  I like how the story deals with all the threads and everything is brought to closure.

This book is the third Cowboy themed book that Joanne Kennedy has written.  The other two books have received positive reviews by most reviewers.  Pick up this book and settle in for a few hours of great reading!

For more information about Joanne Kennedy, visit her website.  This book is a new release available at Amazon and Barnes & Noble