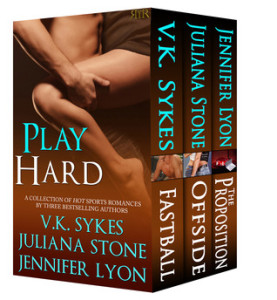 FASTBALL, by V.K. Sykes:
Book one in the USA Today Bestselling series, The Philadelphia Patriots

Baseball reporter MaddieLeclair has spent years chasing her dream job–covering the Philadelphia Patriots major league baseball team. But in order to make it to the top tier of sports reporting, she needs to score an interview with the most private and elusive athlete in baseball, Patriots’ superstar Jake Miller.

On the rebound from a devastating injury, the last thing Jake needs is a pushy female reporter distracting him. But one look at Maddie and he finds himself trying for a different kind of play, one that involves bedrooms and not baseball stats. Sleeping together could damage both their careers, and Maddie is all about saying no. But when it comes to the game of love, Jake is playing to win.

OFFSIDE, by Juliana Stone:
When hockey phenom Billie-Jo Barker returns home and decides to play in the local Friday night hockey league, all hell breaks loose. Not because Billie’s talent is in question, but because Billie is a woman. And though these are modern times, some of the local guys still have a problem letting a girl into their ‘men’s club.’

Soon, Billie is at the center of a small town battle of the sexes, with everyone choosing sides. Her sisters.The townsfolk.Her friends. And yet, the only person whose opinion she cares about doesn’t seem to care much at all. Logan Forest, the man who broke her heart when she was eighteen and the man she now shares the bench with every Friday night.

She’s got a lot to prove and though Billie Jo Barker scores on the ice, will this girl ever score with the man of her dreams?

THE PROPOSITION, by Jennifer Lyon:
The Proposition is book one of three in The Plus One Chronicles Trilogy.

Rich, sexy and volatile, Sloane Michaels has a dark agenda that keeps his heart on ice. His extreme wealth gives him the control he craves and his skills as an ex UFC fighter the tools he’ll need to extract his ultimate revenge. But when the woman he never believed he’d see again crosses his path, Sloane is caught between the vengeance he needs and a sexual conquest he craves.

Kat Thayne has been in survival mode for six years, hiding behind the sweet creations for her bakery. But when a random carjacking brings her face-to-face with her darkest fears and hottest fantasy, Kat is forced out of hiding and offered a dangerously passionate proposition. One she knows she isn’t strong enough to refuse

Why do you need to read this book? This is a great collection of sports themed romances. I thought is was a great introduction to new-to-me authors and I’ve since picked up books by 2 of these three authors! Stay tuned for my thoughts…