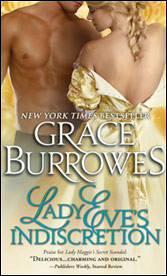 To gain leverage in his efforts to get custody of his niece, Lucas Denning, newly minted Marquis of Deene, needs an heir, a fat marriage settlement, and a wife of impressive social standing. Lady Eve Windham‘s bad judgment where men are concerned cost her virtue, her confidence, and—because it also involved a nasty fall from her horse—her love for horses. In a weak moment, Eve is compromised into marriage with the handsome Lord Deene, who asks her to get back on the horse and stake everything on one glorious ride.

from the back of the book:

Pretty, petite Evie Windham has been more discreet than her parents, the Duke and Duchess of Moreland, suspect. Fearing that a wedding night would reveal her past, she’s running out of excuses to dodge adoring swains. Lucas Denning, the newly titled Marquis of Deene, has reasons of his own for avoiding marriage. So Evie and Deene strike a deal, each agreeing to be the other’s decoy. At this rate matrimony could be avoided indefinitely…until the two are caught in a steamy kiss that no one was supposed to see.

Interesting contrast between the two blurbs. I picked up this book rather than asking for a review copy this time around. I’ve thoroughly enjoyed all the books that I’ve read by Ms. Burrowes and this one was no different. I enjoy Ms. Burrowes style of writing and everyone of these books are different. Some leave me in tears because of the beauty of the writing and how touching the story is. Some leave me triumphant because of the achievement of the characters. Some are just a must-read-to-the-last-page reads. This one fit in the last category.

What I particularly like about all of this series of books is the glimpses we get of the Duke and Duchess. The Duke is a meddling, old soldier. Now that his children are grown he is determined to marry them off. Not only that, he has wonderful interactions with his Duchess.

The following is an excerpt from part way through the story involving the Duke and Duchess:

“Percival Windham, you shouldn’t have.”
He glanced down at the yellow tulips in his hand. “I spared the roses, amd it’s my own damned garden. I can pick a few posies for a pretty girl when I jolly well please to.”

He crossed to the sideboard, poured some water into a glass, and stuck the flowers on the windowsill. His wife would pass by the bouquet, move a couple of blooms about and rearrange the greenery, and instead of looking ridiculous in a ducal study, the flowers would look exactly right.

He adored this about her as well.

She set her novel aside – reading one by daylight was a sure sign none of the children were in residence – and patted the place beside her on the sofa.

“Does love need an occasion?

She cocked her head and studied him. “Give me a hint.”

“It is the anniversary of our third kiss.”

The smile blossomed again, a trifle naughtier to a husband’s eye.

She had named many of their earliest romantic encounters.

The Scorcher. The Ambush. The Ravishment of My Reason. The Obliteration of my Resistance.

He particularly enjoyed recalling that last one and thought she did too. Nothing had pleased a young husband more than to hear a catalogue of his wooing as categorized in Her Grace’s intimate lexicon.

“Yes, the Scorcher.” He took a seat beside her, and when he reached for her hand, she was already reaching for his. “Such an occasion is not to pass without a token of my esteem.”

I hope you enjoyed that small glimpse at the Duke and Duchess. I noticed that the Duke & Duchess’s novella has been released…..so I’m off for some instant gratification – shopping on my Nook 🙂

Pick up a copy of this book – and if you haven’t read this series, starting at the beginning and enjoy each book for the pleasures that they will bring to your life!