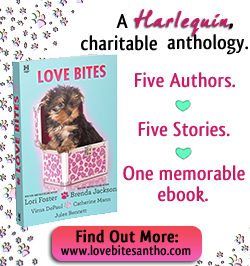 On May 10th at 6pm EST, a virtual kick-off party is scheduled to take place where readers will have an opportunity to interact and ask questions of the anthology authors: Lori Foster, Brenda Jackson, Virna DePaul, Catherine Mann, and Jules Bennett.

RSVP for the event at  http://www.eventbrite.com/event/3434726359/  for a chance to win a complete signed set of the Primal Instinct series plus “Deadly Is the Kiss” by Rhyannon Byrd (9 books total)!!

During the live event, each of the anthology authors will be giving away one autographed book to a guest from the pre-registration sign-up.  You must attend the event and be present to win a prize.  One of the books being given away is a Limited Edition Print Copy of “Love Bites” signed by all five authors!!

Other ways to win more books:

The “Love Bites” anthology is set to release on June 1st, and will be available in digital eBook format.

Stay up to date on the latest “Love Bites” event news by visiting
http://www.lovebitesantho.com

I picked up this book a few weeks ago when I recognized it as the one I hadn’t read of Lori Foster’s latest series.  It certainly was eye catching!  The picture on the

front was hot and the synopsis on the back lead me to believe that I had in my hands another sizzler.  It had been a while since I had read the other books of this series and so I had some trouble at the beginning remembering the premise and the characters of the other books.

In Back in Black, Gillian Noode (too obvious a pun) is hired as a PR consultant for Drew Black – the aggressive, potty-mouthed, head of the SBC Fight organization.  She is supposed to mold him into a softer, gentler, PG rated version of himself.  So….she sleeps with him……repeatedly!  I have come to anticipate super-hot love scenes from Lori Foster. Don’t get me wrong, I enjoy  the sensual nature of her books!  I also realize that I am reading fiction, not non-fiction.  But really, Gillian has been hired because of her reputation as being able to deal with difficult clients and what does she do? – She drops her laundry – over and over and over again!

Every time Gillian tries to talk business with Drew, he seduces her.  She never calls him on this behavior with any degree of believability.  She comments several times that she has been hired to do a job and she isn’t supposed to sleep with him.  She seems to be vaguely concerned that she’ll lose her job, but these concerns don’t seem to keep her clothes on!

By the end of the story there does seem to be the required change in Drew’s behavior, but only when Gillian is there to prompt him.  There is a wonderful relationship between Brett and Audrey that I humbly feel could have been a better focus of this installment of the SBC books than the interaction between Drew and Gillian was.  On the raw heat scale this book gets a 5 but otherwise gets a 3.5

My Man Michael is billed as the 4th book in the SBC series, but as another reviewer stated “If this book has been a standalone, rather than the 4th in a series, it would have gone down better.  As part of the SBC series, I, the reader, feel

betrayed and suckered.”  I’m not sure that I feel quite so strongly as the above reviewer did, but this book is about a member of the SBC team being beamed into the future.  Don’t get me wrong…..I’m a huge fan of the old Star Trek series and enjoy hearing the line “Beam me up Scotty”, but I spent money on a book that was billed as one of a series, not a futuristic romance! I’m not a fan of futuristic romances, not to mention the latest craze of paranormal books give me nightmares.  I’m not part of the female population that finds vampires erotic!

I guess I should have suspected that something was a bit funky with this book if I’d just had a look at the YouTube Trailer for the book.

Not sure where to begin describing this book!  I guess the premise of the book is that one of the SBC fighters (Michael) had been significantly injured and will never fight again in present day earth.  A woman appears in his hospital room and offers to take him to a place where he will be whole.  That she can fix him.  She, of course, has another agenda as her future version of earth needs a strong man like Michael to help make them stronger (by breeding with them, of course)  The story proceeds in a Gene Roddenberry kind of fashion with furniture appearing out of thin air to a virgin being left out as a sacrifice for the dragon.  This book has some sizzling sex scenes like we can expect from Lori Foster, but so many plot holes a truck could have been driven through this book!

If science fiction is your thing, buy this book and enjoy.  I had to force myself to finish it.  I don’t think Lori Foster is a must buy from now on!
The Romance reader says: “My Man Michael is a good story, based on a pretty unbelievable premise. If you can swallow the space travel, futuristic colony and sacrificial virgins, then you will really enjoy the rest of the tale.”