mad about the duke

Today is Series Sunday! We are going to continue talking about Elizabeth Boyle’s books! I must admit, she hasn’t written a book that I’m not fond of, but some I’m more attached to than others! This is one of those books. This book will sit on my keeper shelf for a long time! 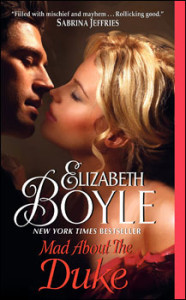 Mad About the Duke by Elizabeth Boyle

Source:  I purchased a copy of this book to read and review

Never judge a duke by his cover…

Level-headed Lady Elinor Standon will not allow her greedy stepfather to wed her younger sister to the highest bidder! The only way to stop this evil plan is for Elinor to to gain control of her sister’s guardianship, but to do that she needs to get married. Convinced that nothing less than a duke will do, she hires Mr. St. Maur, Esq. to help her land her lofty lord… However her plans go awry as she discovers that beneath her solicitor’s rumpled coat and haughty demeanor is a man all-too-desirable to ignore and she finds herself falling for more than his unconventional legal advice.

James Tremont, the ninth Duke of Parkerton, is astonished by the freedom and anonymity he’s gained simply by donning his brother’s ill-fitting jacket, especially when an exquisite, peer-hunting beauty mistakes him for a solicitor… Now he finds himself tangled up by more than her legal woes. For until he can undo the straight-laced yet delectable Elinor, his identity must remain a mystery—because by not having revealed it immediately, this dedicated bachelor may have already sabotaged his one chance for the madness of finding his one true love.

Here we are at yet another book in this wonderful series that Elizabeth Boyle has been creating.  I, of course, am reading them out of order, which would normally annoy me.  This set is different.  It isn’t really about the connectivity of the series as it is about the details of each individual story.

I think that this story is my favorite of the series so far.  Lady Elinor Standon is another one of the Standon widows that have been banished to a drafty house because not only can the three of them not get along, but they seem to be finding themselves in scandal after scandal.  Elinor has decided that she must marry again to protect her younger sister.  Her evil stepfather – Lord Lewis – is threatening to marry her sister off to the highest bidder like he did Elinor (years ago to the nasty Edward Sterling, the Marquess of Stanton).  The only way she figures she can stop this from happening is to marry some one with more power than her stepfather.  When she mistakes James Tremont for a solicitor, she sets the story in motion.  James Tremont is the Duke of Parkerton but he is so astonished to be mistaken for a solicitor, that he becomes this new character.  He revels in the freedom, not being a duke is giving him.  But he is constantly confounded by the tenacity of Lady Elinor.  His attempts to solve her issues like a male and being corrected by his sister-in-law are hysterical.  Absolutely classic male thinking vs female thinking!

The characters of this story are wonderfully crafted.  There is certainly carry over from the previous stories, but the current characters are delightful.  James Tremont or the Duke of Parkerton, is wonderful!  He is lost in his current role as the new Duke of Parkerton, and is thoroughly delighted by being mistaken for a lowly being as a solicitor.  He grasps this role and goes with it.  The way he is written, we are aware of what he is thinking, and what he is saying.  Reading in that pattern has the reader laughing out loud at times!  He is in awe of Lady Elinor.  He wants to help her, yet he doesn’t want her to be with anyone else.  Because of that he constantly ruins his own plans.  His reaction to being dismissed as a potential husband is so pompous that it has the reader laughing out loud!

Lady Elinor has had a hard life.  She was married to a degenerate slob and is determined never to marry again, until the well-being of her sister is treatened.  She then gathers up her courage and hunts down a potential mate that will be more powerful than her step-father and protect her sister from the fate that she was sold into!  I love the steely backbone that she has, yet the ability to depend on James when she decides she can.

Some of the other books of this series are more colorful and filled with more flamboyant characters.  I felt that the character list of this one to be smaller than others, but the effect is more intimate, somehow.  I loved these characters and this book.  It will be one that will sit on my keeper shelf for some time, being re-read multiple times!

Mad About the Duke is available at Amazon