Today is the day to share my thoughts about the latest book I received from Sourcebooks to read and review.  Believe it or Not is the second book that I’ve read by Tawna Fenske.  It, like Making Waves, is laugh out loud funny!  I hope you enjoy my thoughts on this book!

Believe it or Not by Tawna Fenske
ISBN: 978-1-4022-5718-6
Release: March 2012
Publisher: Sourcebooks Casablanca
Source: I received a copy of this book from the publisher to read and review

Do you believe in…..Accounting?
Numbers never lie, so Violet McGinn found safe haven in the most boring profession she could find. Until her renowned psychic mother lands in the hospital and Violet has to run her business. Now you can have your taxes filed and your aura read, in one convenient location.

Do you believe in….Magic?
Drew Watson is the jaded owner of the local hot spot next door, and doesn’t need a single thing except a good crowd to dance to what he’s spinning on Saturday.

Do you believe in….Love?
The only thing Violet and Drew seem to have in common is that neither believes in that psychic hoo-hah. Except Drew seems to play exactly the right song at exactly the right time. And the way they can’t seem to resist each other just can’t be a coincidence…..

This book is laugh out loud funny! Violet McGinn is the only child of a well know psychic. She has never really believed that her mother has any psychic ability, and at her first opportunity she moved to the far side of the US to get away from her mother and her wacky friends. Her mother has now fallen and requires not only surgery, but a lengthy convalescence, so she returns home to take care of her mother and her mother’s psychic business until her mother can get back on her feet. The sticky part is that she needs to step into her mother’s shoes, so to speak, and run the business. Her mother has always insisted that she has psychic power, but Violet is wondering how she will continue to fool some of her mother’s long term clients. To add to the equation, the yummy man who is running the bar next door always seems to be popping up. He and his music seem to be playing a role in the accuracy of her psychic readings.

Drew, one of the owners of the bar next door to Violet’s mom’s business is divorced and a bit of a player. He seems to go out with any girl who hands him her phone number, but is he or is he not gay – his bar features male strippers.

As I started with – this book is laugh out loud funny. I have read an other book of Tawna Fenske a few months ago, and she has the ability to create absolutely hysterical situations to put her characters in. Not only that, but her characters are quirky. Violet’s mother is a tree-hugging, throw back from the 60s hippy who thinks she is psychic. Her friends are equally off-beat and are intent on trying some more holistic healing methods on her, to the puzzlement of the doctor involved in her treatment. They want to try everything from chanting to aromatherapy, even if it sets the curtains on fire.

Pick up a copy of this book if you need a good laugh with a wonderfully endearing HEA. Tawna Fenske continues to entertain her readers with this book, and I look forward to anything else she writes in the future.

Buy a copy of Believe It or Not

It’s time to announce some winners of my recent giveaways!  I seem to be a bit behind in in my announcements 🙁

The copy of the ARC of Midnight Waltz by Jennifer Blake 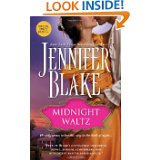 is Anne R!  I’ll be getting this copy out to Anne tomorrow and I hope she enjoys it! 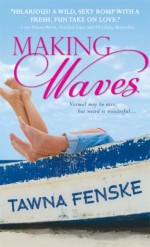 The second book that I need to give away is Making Waves by Tawna Fenske.  I loved this book and I hope that Amy S. will enjoy the book as well!

Thank you to everyone who entered.  Keep dropping back by my blog as I’m working hard to thin out my shelves!  I’ve been reading some great books recently and I enjoy passing them on to someone else who will enjoy them!

Today I’m reviewing an ARC of Making Waves by Tawna Fenske that I received from the publisher. I thoroughly enjoyed this book and would like to pass it on so that someone else could enjoy it as well. Have a read through my review and decide if you would like to enter the giveaway for a copy. If you are interested in entering to win, fill out the form found below.

Making Waves by Tawna Fenske
Publisher: Sourcebooks
Release: August 2011
Source: The publisher gave me a copy to read and review

When Alex Bradshaw’s unscrupulous boss kicks him to the curb after 20 faithful years as an executive with the world’s largest shipping company, he sets out to reclaim his dignity and his pension. Assembling a team of fellow corporate castoffs, he sails to the Caribbean to intercept an illegal diamond shipment. None of them counted on quirky blonde stowaway Juli Flynn, who has a perplexing array of talents, a few big secrets, and an intoxicating romantic chemistry with Alex…

Making Waves begins with Juli Flynn finding out that she has to take her uncle’s ashes to the Caribbean as one of his last requests. We discover that Juli has a few problems keeping jobs and since she is on the verge of losing her latest one, she decides to take a package, honor her uncle’s last wish and take his ashes to St. Thomas. Meanwhile, Alex Bradshaw and his co-workers are fired from their jobs with a large shipping firm without working long enough to qualify for their pensions. Broke and without job prospects they hatch a plan to hijack their ex-boss’s illegal diamond shipment. Juli and Alex meet by chance in a bar the night before they are both to leave on their respective adventures. Alex leaves after a steamy make out session and leaves Juli wondering why.

Making Waves by Tawna Fenske was a complete surprise to me. This is the first book that I have read by Tawna and was totally delighted. All the characters are a delight to read about. Juli is still trying to find her place in life. She’s too bright to easily fit in and her experiences in her young life mark her as different. Alex was hurt many years ago by a woman and has been afraid of commitment ever since. Juli and Alex are the most “normal” characters in the book. There is Malcolm, a Shakesphere quoting pirate, and his two well muscled, if slightly dense brothers and Juli’s mom who seems to spend her life combining incompatible items into “dinner”.  Simply amazing what this woman puts in a jellied salad. Alex’s former coworkers are made up of Phyllis, the former Olympic steeplechase winner turned socially inept computer genius, Cody, the former NFL tight-end who dreams of being a chef and wants to be called “Cookie”, and Jake, the former head of accounting who is aware of their mob-involved former boss’s diamond smuggling operation. Reading this list of characters, you just have to know that the book is pretty funny! A comment on the back of the book is: “Dive into Tawna Fenske’s hilarious world of wacky, quirky, heartwarming romance.” I love that description as it is very true. This book is hilariously funny; it is wacky and quirky; most of all it is filled with wonderfully written happily ever afters……yes plural 🙂

There are so many memorably scenes in this book that I can’t list them all. The first one that comes to mind is where Alex and Juli meet in a bar and decide to enter a contest for newlyweds in order to win $500.00. The sticky point is that they just met and know nothing about each other. The section where Juli is giving advice to Phyllis on how to attract a man is downright hysterical.

Making Waves is a fast moving story.  There are quite a few characters and it took me a while to keep everyone straight.  Once everyone was set in my mind, I was wondering why I had to work to figure out the characters as they seemed so individual!  I laughed out loud enough times to draw attention to myself!  Ms. Fenske has the ability to develop a storyline and characters that has the reader cheering for some characters and booing others!  I totally enjoyed my romp through this book! Although I am new to this author, I will certainly be on the look out for more of her books in the future!

As I said at the beginning of this post – I’m giving away my ARC of Making Waves to someone in Canada or the US.  Fill out the form below to be entered to win.
****Giveaway is over – thanks for supporting this giveaway! ****