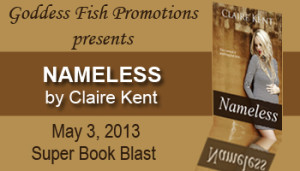 Today we are welcoming Claire Kent to the blog! She is touring her book, Nameless, with Goddessfish Promotions. She’s here today to share about her books, but also to giveaway a $50.00 Amazon Gift Card to a random commenter from the tour. To increase your chances of winning, click HERE to find a list of other blogs to comment on. 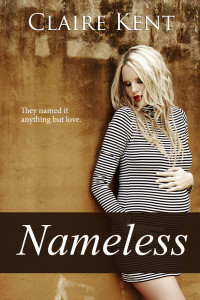 They named it anything but love.

After a failed marriage to a domineering man, Erin refuses to be controlled by anything or anyone. That includes Seth, the father of her baby—a man who was supposed to be only a one-night-stand, a man who’s used to always getting his way.

There’s a reason that Seth Thomas, a successful defense attorney, is often referred to as the Bulldozer. If something needs to happen, he makes it happen. That includes being part of his baby’s life—even if he never expected to be a father, even if Erin doesn’t really trust him.

They’ll work out an arrangement in the best interest of their baby—and if they occasionally have sex, well, that’s just an added perk—but they both agree on one thing.

What they have will never be love.

Erin frowned.  “Don’t start with that again.  It was just a fluke.  Not evidence of any particular talent of yours in bed.”

Erin thought about it for a minute.  “Nah.  It’s not late yet, so I think I’ll head back to my dad’s.  I’m twenty-six, but he still worries sometimes.”

Swallowing, Erin remembered the funeral he’d attended that day.  She felt a surprising swell of tenderness rise up in her chest.

He glanced over at her and seemed to notice her expression.  Their eyes met, and they shared something in the silent gaze.

Then it was gone.

Erin snorted and rolled out of the bed to collect her scattered clothes.  “I can’t believe you can use the word ‘assuage’ after the night we’ve just had.”

Giggling, she started pulling on her clothes.  “That’s more like it.”

When she was fully dressed, she turned back to him.  He sat on the side of the bed watching her—his expression thoughtful and guarded again, despite their light banter just moments before.

She knew what this encounter had been for him: a temporary reprieve, an escape, an interlude not connected in any way to his real world.

Exactly as it had been for her.

There was nothing else to say.  She felt a tiny clench in her belly.

But she and Seth shared nothing but a night of great sex, and there was no use in pretending that they did.

Claire has been writing romance novels since she was twelve years old. She has a PhD in British literature and, when she’s not writing, she teaches English at the university level.

She also writes contemporary romance under the penname Noelle Adams.

Nameless is available for sale: