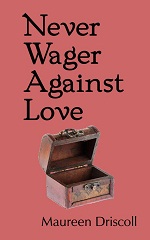 Source: I received a copy of this book from the author to read and review

When Arthur Kellington was fifteen, a Romany fortune teller predicted that his true love would be killed. Since then, he’s resolved to never fall in love. He has no trouble keeping his resolution until he meets Vanessa Gans, an agent with the Home Office who is on the trail of two hardened criminals. As he finds himself falling for her, he must keep his distance emotionally as the only way to protect them both.

Despite her illegitimate birth, Vanessa Gans has worked her way up to being one of the Crown’s finest agents. She’s reluctant to accept Arthur’s help initially because she doesn’t want to place him in danger. Then she realizes her heart is truly at risk because there can be no honorable future between them.

NEVER WAGER AGAINST LOVE is a romantic tale of bravery, sacrifice and love. It contains explicit language. The earlier books in the series were NEVER MISS A CHANCE (Book 2) and NEVER A MISTRESS, NO LONGER A MAID (Book 1), which USA TODAY’S HAPPILY EVER AFTER blog called “enjoyable, suspenseful and satisfying.”

Never Wager Against Love is the 3rd book that I’ve read by Maureen Driscoll in her Kellington series.  This is a wonderful series about the members of the Kellington siblings – their trials and their loves.  This family is now headed by the eldest brother Liam, now that their parents are gone.  Liam is a wonderful big brother – a disciplinarian when necessary, but a guiding light for his siblings.  I look forward to his story as we are getting glimpses of it as we read through the series.  He apparently is book 5, so I have a bit to wait!  I have read Edward’s story in the first book, Never a Mistress, No Longer a Maid (and loved it) and I’ve read Lizzie’s story in Never Miss A Chance (was cheering out loud while reading that one!) and now we come to Authur’s story, appropriately named Never Wager Against Love.

As you find out from the blurb above, Arthur found out at an early age that his true love would be killed,  The gypsy that told him this was rarely wrong, but encouraged him to live his life regardless.  As would happen, he decided to never fall in love.  This decision was easy to keep until he runs into Vanessa Gans.  Vanessa is an agent of the home office whom we meet at the end of the first book when she is tracking some criminals and she was the woman for Arthur.  She annoyed him, she didn’t listen to him like a proper lady would, and she could ride and shoot better than him. Their interaction through the first part of the story was delightful and had me smiling and chuckling.  Arthur was determined not to be outdone by a mere woman.

Never Wager Against Love is available on Amazon