one queen with two kings

Welcome also to Steamy Saturdays! This is the day of the week when we get to talk about a book that is on the steamier side of Romance. This week’s selection is One Queen with Two Kings by Louisa Neil. I enjoyed this book and I hope you enjoy my thoughts about it! 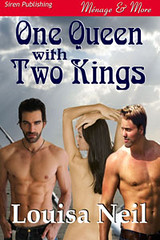 One Queen with Two Kings by Louisa Neil
ASIN: B0068NF4LS
Publisher: Siren Publishing
Release: Nov 16, 2011
Source: I received a copy of this book to read and review from TRR

Blurb:
On the morning of her second wedding, Thea realizes marrying Lloyd is a mistake and learns his ultimate motive is to gain control of her family business. When confronted, Lloyd admits lying. His bombshell confession is that he gave the search team false coordinates, wanting Thea for himself instead of looking for Dexter and Russell’s crash site. When the men are found alive, they bring home proof that their plane was sabotaged by Lloyd. While reconnecting with her husband and his friend, she realizes their relationship changed. Catching the men in a compromising sexual position reinforces her theory. Accepting Dexter and Russell had become intimate while on the island is earth-shattering. She’s floored when they suggest combining the two relationships into one, a threesome the men have dreamed about. Can she share her husband with his best friend? Can she be the queen with two kings?

One Queen with Two Kings is a menage that I picked up to read some time ago.  From the blurb it seemed like an interesting concept for a story.  Two best friends, Russell and Dexter, crash land a plane on a deserted island and are there alone for 2 years before they are found.  In the meantime, one of the men’s wives has moved on and this book starts on her wedding day to another man.  Realizing that she is making a big mistake, Thea backs out of the wedding, and the past two years, complete with all the false stories that her supposedly loving fiance has been spreading about her come to light.  She comes to the conclusion that her husband and his friend might not be dead after all, and re-opens the search for them.  The men decide that what happens on the island stays on the island, but they aren’t able to keep that promise after their rescue.

One Queen with Two Kings can be purchased at Amazon