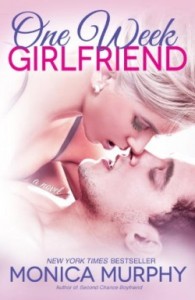 That one single word best describes my life these last few years. I’m working at a temporary job until I can finally break free. I’m my little brother’s temporary mother since our mom doesn’t give a crap about either of us. And I’m that temporary girl all the guys want to get with because I give it up so easily. According to the rumors, at least.

But now I’m the temporary girlfriend of Drew Callahan, college football legend and all around golden guy. He’s beautiful, sweet—and he’s hiding way more secrets than I am. He’s brought me into this fake life where everyone seems to hate me. And everyone seems to want something from him. The only thing he seems to want though is…

I don’t know what to believe anymore. All I know is, I think Drew needs me. And I want to be there for him.

Why you need to read this book: The characters are really well written. I bought into the whole story line because of the characters. I’m not normally a fan of NA, but this book as well as tomorrow’s (Second Chance Boyfriend) are good reads!

“Aren’t you bringing a coat?”

I shake my head, hold back the gasp that wants to escape when he scoops up my hand with his. My reaction to him is so ridiculous and I really need to learn how to control it. Everything between us isn’t real and I have to remember that. No matter how good it feels.

And my fingers entwined with his feels really, really good.

“You’re going to get cold,” he says as we stop in front of the garage and wait for his parents. A hint of satisfaction rolls through me because after they nag at us from the moment we arrive home, now we’re the ones waiting for them.

“Maybe you’ll keep me warm?” With a smile aimed directly at him, I nudge his upper arm with my shoulder, marveling at his rock hard biceps. I’ve been hoping to catch a glimpse of him with his shirt off, but it hasn’t happened yet. I know beneath the clothes he’s built like a god, and I want to see all that muscly goodness.

He lifts a brow. I really love it when he does that. “Are you flirting with me?”

I’m about to flirt some more when his parents appear, the both of them walking hurriedly toward us as one of the garage doors open, revealing a gorgeous black Range Rover parked within. I try to act all nonchalant as we approach the car, Drew opening the door for me so I can slip inside the back seat first. I don’t expect him to slide in after me, and I swear I felt his fingers tickle the back of my thigh for the briefest second.

But when we settle in our seats, his expression is completely neutral so I figure I imagined it.

His parents aren’t really talking and that makes me uneasy. I wonder if they had a fight. Or if they’re still pissed because I took too long. Drew reassured me earlier the dinner didn’t start until seven so even now we still have a half hour. But maybe they like to be early and snag a good table. Crap, I don’t know.

I’m going into this blind and I’m nervous.

Drew reaches out and grabs hold of my hand again and when I look up at him, he smiles at me in the darkness. I have this sudden sense that it’s the two of us against the world. We’re in this together and we have to depend on each other to get through it. Sounds completely dramatic and silly but I can’t help the way I feel.

I also can’t help but stare at him for a little too long, marveling at the masculine beauty of his face. It’s so unfair when people are so sickeningly good looking and that’s Drew. He should disgust me he’s so gorgeous.

Instead he makes me feel all swoony and stupid. Like my head is getting lighter from all the brain cells evaporating the longer I look at him and I wonder if he can feel me staring.

When he turns to meet my gaze, I know he feels me staring. He smiles, the sight of it reassuring my nervous, racing heart and I blurt out the first question I can think of. “What does the D stand for?”

He frowns and shakes his head. “What D?”

“Your middle name. You’re Andrew D. Callahan.” I pause, hoping his parents aren’t listening to us. His dad is backing the car out of the garage and Adele is murmuring something to him, but I can’t make out what.

“Ah.” He nods, as if he knows an age-old mystery. “What do you think it stands for?”

Hmm, he’s acting kind of flirtatious too. I like it. Makes the moment lighter, especially with the tension-filled drama going on in the front seat. “Dumbledore?”

Chuckling, he shakes his head. “No.”

I tap my index finger against my chin. “Daniel.”

“Huh, that goes with the whole Callahan Irish theme, but wrong guess.”

I go through a few other D choices, all of them ridiculous, when I finally hit on the right one.

His smile grows. “You finally got it.”

“You’re asking me? Shouldn’t you determine the prize?”

“You can have whatever you want.” He skitters his thumb across the palm of my hand, sending a flurry of shivers across my skin. “Name it and it’s yours.”

One Week Girlfriend is available on Amazon