pleasures of a notorious gentleman 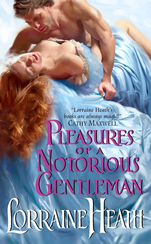 As the black sheep second son of an earl, Stephen Lyons has gained a reputation in the art of seduction, but when his wicked ways result in scandal, he enlists in the army to redeem himself. On the battlefield, he proves courageous…until he is seriously wounded. Returning home to recover, he discovers he can’t the angelic beauty who arrives at his doorstep, his babe nestled in her arms.

Mercy Dawson will risk everything to protect the son of the dashing soldier she once knew and admired. When Stephen offers to do the honorable thing, she is determined that London’s most notorious gentleman will desire her and no other. But Mercy fears that what began as an innocent deception could destroy her dreams and their blossoming love if Stephen ever learns the scandalous truth…

I think that Lorraine Heath has managed to create two equally outstanding characters in this book. Stephen Lynons has been damaged in the war. He used to be quite the rake, but now he is significantly damaged and trying to recover. Mercy is a woman who tries to do the honorable thing – bringing a baby back to it’s family, and ends up doing another honorable thing – healing Stephen. I loved this book!

Pleasures of a Notorious Gentleman is available on Amazon