The Heartbreaker is the fourth story in a series of 4 books written by Rexanne Becnel.  It tells the story of the relationship between James Lindford, Viscount Farley, a recovering rake and Phoebe Churchill, a country woman with a good 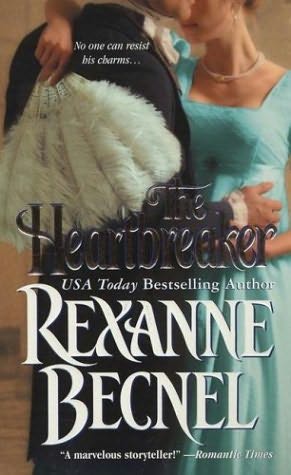 heart.  Although this book has the above hero and heroine, they seem to play second fiddle to three little children.  In James’s attempt to mend his rakish ways, he hunts down his various illegitimate children and essentially buys them from their mothers.  When the story starts he has managed to acquire potty-mouthed Clarissa (Izzy), a 10 year old that he rescues from the stews and has seen the evil side of life, and Leya, a chubby, blue-eyed baby with dark skin whose mother died in India. James’s open acknowledgement of his illegitimate children causes his fiancee to break their engagement and therefore James’ hope of a political career.  Izzy’s shenanigans drive most of James’ London staff away and finally he escapes the gossips by decamping to his country estate.

Phoebe has spent the last eight years taking care of her mother and her sister’s illegitimate daughter, Helen, on the family farm.  They barely make ends meet and when things start disappearing, Phoebe is determined to catch the thief. When she discovers that her thief is the 10 year old daughter of the Viscount Farley, she marches Izzy to Farley Park to meet him.  Phoebe, who has never felt much attraction to men finally feels the lust her mother has always warned her about upon meeting James.  Over the next few days, Phoebe quickly finds the solution for Leya’s stomach upset and starts to show progress with Izzy’s behavior.  James is determined to have Phoebe as governess to his girls despite his growing attraction.  He is actually determined to make Phoebe his mistress as well as his girl’s governess.  At this point, I feel, the story falls apart.  Several reviewers comment on the fact that if James is indeed trying to mend his rakish ways and has learned his lesson, he wouldn’t even be considering trying to make Phoebe his mistress, he would be trying to find some way to marry her, despite the class differences.

To add insult to injury, Phoebe’s sister shows up and we find out that her daughter, Helen, whom Phoebe has been raising, is actually James’s 3rd illegitimate daughter.  Is there anyone James hasn’t slept with??  To make matters worse, his ex-fiancee shows up again wanting him back – or at least not wanting to marry the old man her father is pushing on her.  She doesn’t seem like much of a catch and doesn’t even seem to react  negatively to Phoebe being the object of James’ affections.

What starts out a wonderful, meaningful story about a rake trying to reform seems to be derailed about 2/3rds of the way through and even the inevitable happy ending doesn’t completely recapture the feeling at the beginning of the story!

The Romance Reader gives The Heartbreaker 3 stars and says the following: “As I was reading The Heartbreaker, I felt that this was a solid three-heart book –nothing particularly special or memorable about it but nothing really awful either. Three weeks later I can second the nothing particularly memorable part – I’d pretty much forgotten the details of the plot in that short length of time.“

I  LOVED The Bridemaker!  I actually read this book first of the four and it was this book that had me searching for the others of this “Maker” series.

We are introduced to “The Bridemaker” – Hester Poitevant (don’t like the name!) who earns her living by tutoring awkward young ladies of the ton to be

sophisticated prize catches for the season’s marriage mart.  She has quite a history of finding just the right clothes, just the right advice, just the right tutoring to make ugly ducklings into swans!  She hides herself in plain sight as a widow, downplaying her beauty, hoping no one remembers her past.

When her latest charge, Dulcie, sets her sights on Adrian Hawke – the disreputable American merchant, Hester is forced to interact with Adrian to try to dissuade him from courting Dulcie.  We actually met Adrian Hawke in The Matchmaker.  He was the illegitimate son of the Neville Hawke’s deceased older brother.  At the end of The Troublemaker he goes to live with Marshall and Sarah in America.

Although Hester is successful at dissuading Adrian from pursuing Dulcie, he sets his sights on un-peeling the layers that make up the facade of Hester.  What results is a wonderfully endearing love story.  It has all the glam and glitter of Regency England, that I love, and a swashbuckling hero that sets my heart to pounding.  A must read!

The Romance Reader gives The Bridemaker 4 stars and says: “It’s a great combination of humor, romance, secrets that must finally be revealed, selfishness, confusion, and a wonderful disregard for the pretentious propriety that is the essence of the ton, as the couples sort themselves out, revealing themselves to be wonderfully well-matched, and as lives change in ways that the reader sometimes doesn’t expect.“

The Troublemaker, the second in Rexanne Becnel’s “Maker” series introduces us to Marshall MacDougal and Sarah Palmer.  Sarah, the youngest of the 3 half-siblings we were introduced to in The Matchmaker.  I should admit up front that I had trouble warming up to this book!

Sarah is a conflicted, spoiled girl who seems to attract trouble.  She tries to elope with a fortune hunter at the beginning of the book.  Her brother stops the elopement and her family send her to Scotland to spend some time with her sister and wait out the scandal.  When she arrives in Scotland she discovers that her sister and family are away for a month but she decides to stay by herself at the house.  The long-time servants apparently decide to do nothing about this situation.

Marshall (Marsh) MacDougal was born in American and grows up thinking that his father is dead. He finds out upon his mother’s death that he may have a father alive and well in Kelso, Scotland and he heads off to find him.  Marsh is determined to make his father pay for all the years of abandonment.  When he arrives in Scotland, he discovers his father is long dead and turns his anger to trying to prove he is the true heir.

Although I liked the end of this story there were too many problems with the actual story line.  Sarah starts the story as a spoiled little brat, but quickly does an about face and decides to put her family first and protect them against Marsh’s efforts.  Marsh is too full of angst.  He is rude and overbearing.  Not a particularly appealing hero.  The conflict between Marsh and Sarah seem to just go away when he discovers that he really is the true heir and he isn’t going to tell anyone.  Maybe Sarah just saw positive things in Marsh that the rest of us didn’t!  In future books he is an appealing character, I just didn’t find him to be so in this book – too conflicted.

Not a total loss of a book!  Just not my cup of tea!

RT Reviews give this book 4 stars and says the following: “…it is Ms. Becnels gift for searching her characters hearts and souls that brings her romances
to a new level and earns her readers admiration.”