Today we are talking about a book that I read some time ago and never posted. One Good Earl Deserves A Lover by Sarah MacLean is a great read and I’m sorry I didn’t post my thoughts on this book in a timely basis. 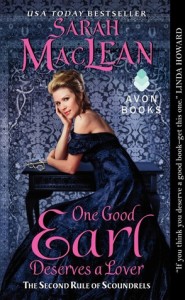 The brilliant, bespectacled daughter of a double marquess cares more for books than balls, for science than the season, and for laboratories than love. She’s looking forward to marrying her simple fiancé and living out her days quietly with her dogs and her scientific experiments. But before that, Pippa has two weeks to experience all the rest–fourteen days to research the exciting parts of life. It’s not much time, and to do it right she needs a guide familiar with London’s darker corners.

She needs Cross, the clever, controlled partner in London’s most exclusive gaming hell, with a carefully crafted reputation for wickedness. But reputations often hide the darkest secrets, and when the unconventional Pippa boldly propositions him, seeking science without emotion, she threatens all he works to protect. He is tempted to give Pippa precisely what she wants…but the scoundrel is more than he seems, and it will take every ounce of willpower to resist giving the lady more than she ever imagined.

Why do you need to read this book?  I love, love, loved the relationship that develops between Cross and Pippa. They so badly need each other – like the are complete when together. An unlikely match but a beautifully romantic one! A must read!

One Good Earl Deserves A Lover is available on Amazon

I hope that you have been enjoying my reviews of Sarah MacLean’s books over the past few weeks!

Nine Rules to Break when Romancing a Rake at the beginning of this series.  Although this book is from some time ago, it serves as an excellent start to a wonderful series.

The second book in the series is Ten Ways to Be Adored When Landing a Lord.  This book allows us to continue the story and find out about the second brother in the family.

Because I don’t have a paper copy of the third book in this series, I’m only giving away what I have.  You can get extra points for following me on Twitter, Facebook and  extra points for leaving a lovely comment 🙂

To enter, fill out the form below.  I’ll leave this contest up for a week and announce the winners around Boxing Day.  Hope everyone has a great Christmas!

My favorite day of the week, where I get to discuss the latest book in a series that I’m reading.  Today is the 3rd in the latest series by Sarah MacLean.  I though it was the last of the series, but when putting together this post, I discovered that there is another one coming out.  Next week I’ll be giving away some books, and then Series Sunday will be taking a break until after Christmas.  Grab a coffee and sit back and enjoy!

She lives for passion.
Bold, impulsive, and a magnet for trouble, Juliana Fiori is no simpering English miss. She refuses to play by society’s rules: she speaks her mind, cares nothing for the approval of the ton, and can throw a punch with remarkable accuracy. Her scandalous nature makes her a favorite subject of London’s most practiced gossips . . . and precisely the kind of woman The Duke of Leighton wants far far away from him.

He swears by reputation.
Scandal is the last thing Simon Pearson has room for in his well-ordered world. The Duke of Disdain is too focused on keeping his title untainted and his secrets unknown. But when he discovers Juliana hiding in his carriage late one evening—risking everything he holds dear—he swears to teach the reckless beauty a lesson in propriety. She has other plans, however; she wants two weeks to prove that even an unflappable duke is not above passion.

Finally the third part of the series that Sarah MacLean is currently writing has arrived!  I was haunting the mailbox eagerly anticipating that little package to arrive in the mail!  Although I’ve seen the cover on Sarah MacLean’s website, I think this is my favorite cover yet for this series.
Eleven Scandals to Start to Win a Duke’s Heart is the long title for this latest book, which for the sake of my poor typing I will shorten to Eleven Scandals.  Eleven Scandals is the story of the half-sister of the St. John twins, who were the subject of the first two books of this series, Nine Rules to Break When Romancing a Rake (Gabriel St. John, the Marquess of Ralston) and Ten Ways to be Adored When Landing a Lord (Nicholas St. John, the younger twin brother of Gabriel)  We learned in the first two books about the lives and loves of the St. John brothers.  We also learned the history of them losing their mother at an early age.  She didn’t die, but actually abandoned her husband and children and went to the continent not to be seen again.  This abandonment was hard on the boys, but we discover that the mother actually had another child.  Juliana Fiori, the boy’s half sister shows up on their doorstep after her father has died.  Supposedly her parents were married (but the reader assumes that isn’t likely a legal marriage) and Juliana’s mother abandoned her as well.  Juliana’s father was a wealthy merchant in Italy and she has had a rather unusual upbringing.  She can bargain with merchants, stare down ship’s captains, but she can’t fit in with London’s society.
One person that she enjoys getting a rise out of is Simon Pearson, the Duke of Leighton.  Although Leighton has funded Nick’s antiquity trips for years and is a friend, he rubs Gabriel the wrong way.  They can’t even tolerate each other it seems.  Simon is a dedicated Duke, maintaining his properties with a fair and even hand.  He ensures that his mother is provided for, but has always known that his title comes first, he comes second.  Since he is about to become embroiled in a major scandal (his sister is unwed, pregnant and about to give birth) he decides he needs to marry the most upstanding bride he can find.  He has set his sights on Lady Penelope Marbury, a woman above reproach.  The problem is that Juliana keeps bugging him!

Juliana issues a challenge to “The Duke of Disdain”.
“You think you are above passion?  You think your perfect world needs nothing more than rigid rules and emotionless experience?”
He stepped back at the challenge in her soft words. “I so not think it. I know it.”
She nodded once.  “Prove it.” His brows drew together, but he did not speak.  “Let me show you that not even a frigid duke can live without heat.

And so our story begins.  Although Juliana constantly skates on the edge of scandals huge enough to bring down her family once and for all, she endeavors to show Leighton that he needs passion in his life.  Attempts to show him that he needs more that Lady Penelope Marbury, or “The Grape” in his life.
The story about Juliana and Simon is truly delightful!  We have Juliana desperate to burst out of the constraints of English society and Simon determined to immerse himself even deeper into those strict rules and norms.  They are seemingly opposites and set sparks off one another.  They both have alot to learn from each other.  This story moves along quickly, being difficult to put down.  It is wonderful to see the characters of Gabriel and Nicholas brought in to this story, not only so that we can find out what has been happening in their lives, but also to add their “big brother” presence to Juliana’s story.
I love the little touches of humanity that Ms. MacLean gives to Juliana, such as her conjugating verbs in english and italian to calm herself.  Juliana’s constant frustration at the rules of society and her total lack of freedom.  I love her little bursts of independence that help her keep her sanity.  The scene with her riding her horse astride in breeches is wonderful!
I understand that the next story to be released from Ms. MacLean is “The Grape’s” story.  I won’t explain why Penelope is called The Grape, but let you discover it for yourself.  Isn’t the cover beautiful?  Here’s the blurb to give you something to think about til NEXT FEBRUARY!  Really…..why must we wait so long??  It’s painful!

What a scoundrel wants, a scoundrel gets . . .
A decade ago, the Marquess of Bourne was cast from society with nothing but his title. Now a partner in London’s most exclusive gaming hell, the cold, ruthless Bourne will do whatever it takes to regain his inheritance—including marrying perfect, proper Lady Penelope Marbury.
A broken engagement and years of disappointing courtships have left Penelope with little interest in a quiet, comfortable marriage, and a longing for something more. How lucky that her new husband has access to such unexplored pleasures.
Bourne may be a prince of London’s underworld, but he vows to keep Penelope untouched by its wickedness—a challenge indeed as the lady discovers her own desires, and her willingness to wager anything for them . . . even her heart.