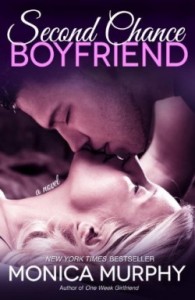 That one single word best describes my life at this very moment. I lost the last games of the season and both my team and my coach blame me. I lost the last two months because I drowned in my own despair like a complete loser. And I lost the only girl who ever mattered because I was afraid being with me would destroy her.

But now I realize how truly lost I am without her. She has become my story…and even though she acts like she’s moved on, I know she still thinks about me just as much as I think about her. She’s beautiful, sweet—and so damn vulnerable, all I want to do is help her. Be there for her.

If only I could convince Fable to give me a second chance. Then I wouldn’t feel so lost anymore, and neither would she. We could be found together.

Why do you need to read this book? This book is part two of a 4 part series of NA books by this author. Although I’m not normally a fan of NA books, I thoroughly enjoyed Second Chance Boyfriend! Down to earth and gritty.

“Brilliant. So full of emotion and depth, that once again these two characters literally leaped off the page.”
~Robin Bielman, author of YOURS AT MIDNIGHT

I stare at Fable, overcome with having her in front of me after not being near her for so long. She’s beautiful, pissed at me, and so…God. I don’t even know what to think. Seeing her again is like having a million electric shocks bolting through my veins, both paralyzing me and goading me into action. I’m…overcome.

All I know is I need her. Now more than ever. “I don’t know what I was going to do,” I finally say.

She crosses her arms in front of her chest, plumping up her breasts in that sexy as hell black bra that I can see through the thin white lace shirt she has on. The outfit kills me. I want to both tear it off of her and throw a coat over her shoulders so no other guy can see her like this. “I can’t do this, Drew.” A laugh escapes her, though it lacks humor. “I think it’s best if we stay away from each other.”

My heart bottoms out. Completely. I can’t even believe she’s saying this. Fighting the panic that threatens to sweep me under, I step closer to her. “Fable…”

She steps back, looking scared, as if she has nowhere to go and that makes me feel like shit. “You should go.”

I take another step toward her, and she takes another one back, bumping against the wall behind her. She’s trapped, she knows it and all I can think is thank God she can’t run away from me. “You don’t want me to leave.”

“Yes, I do.” She nods, her expression firm but her voice is weak.

I move in so close I invade her personal space. Her warmth, her scent wraps around me, intoxicating me and I brace my hands on the wall above her head, my arms bracketing her. I’ve got her completely caged in, and as I gaze down at her pretty, angry upturned face, all I can think is how much I want to kiss her and smudge that bright red lipstick all to hell with my lips. “How late do you work till?” I ask, my voice low, my thoughts…dirty. I want to get her home. Naked. In my bed. Impossible considering how I’ve ruined this fragile thing between us but I have hopes I can turn this around.

The trembling in her body is a clue she’s not over me. The way she’s looking at me with all that pent up longing in her gaze tells me I still have a chance too.

“Too late to meet with you after.” Reaching out, she pushes at my chest, her slender hands resting on my front and I hiss in a breath as if she burned me.

But shit. It feels like she has. Having her hands on me again after so long, it’s like she’s branding me. Making her claim with just a touch.

She has no idea that I’ve belonged to only her for months.

Without thought I lean in, my lips going for hers but she turns her head at the last second and I end up kissing her cheek instead. She’s quivering, little shuddering breaths escape from her parted lips and I close my eyes, desperate to calm the pounding of my heart as I nuzzle the side of her face. “I really fucked up, didn’t I?” I whisper against her skin.

Fable nods, draws in a deep breath as her hands drop away from my chest. “You did.”

“Tell me what I can do to make it up to you.” I need to know. I can’t let her think this is over between us.

She still keeps her face averted, as if she’s afraid to look me in the eyes. “It’s too late. There’s nothing you can do. It’s o—over between us.”

I remove my hand from the wall to cup her cheek, forcing her to look at me. Those big, scared eyes meet mine and for a moment I’m lost. Like we’re back in time and at my parents’ guesthouse when we were about to embark on something big. Something serious. I had this girl in the palm of my hand and she had me. But I was such a chicken shit, I let her slip right out of my grip and now look at her.

She’s…different. Her entire life has changed in a matter of weeks. And I had nothing to do with it. She’s moved on while I’m still stuck.

The realization is staggering.

“I need to get back to work,” she whispers. “You should go back to your friends.”

I stroke her face, let my fingers trace the delicate line of her jaw. She closes her eyes, I notice the delicate movement of her throat as she swallows and I dip my head, this time making that connection I so desperately want. My mouth on hers, breathing her breath, tasting her lips, the sweet, mysterious depths within. She parts her lips immediately and I take advantage, slipping my tongue inside, tangling it with hers.

A groan escapes me and she breaks the kiss first, our eyes opening at the same time and we stare at each other without saying a word, her gaze dropping to my mouth again. I know what she wants.

I want it too.

We can’t resist each other. This one moment is proof. I need to do something, say something to continue this connection.

I need her. And she needs me. I know it.

We both turn our heads to see some guy standing a few feet away, big and intimidating, dressed all in black, his gaze sharp as it lingers on me. He looks like he wants to kick my ass.

Great. After his interruption, the feeling’s mutual.

“I’m fine. Just getting back to work.” She shoves at me and I step back, letting her escape. Just like that.

Fable doesn’t look at me as she heads into the restaurant. Doesn’t say a word to me or the guy and we’re left outside alone, glaring at each other, sizing each other up. He’s older, at least in his late twenties and big.

But I’m taller. And broader. I could take him if I had to.

“Who the hell are you?” he asks, his voice quiet but edged with steel.

“I could ask you the same question,” I toss back.

He crosses his arms in front of him. “I’m her boss.”

Shit. I don’t want to screw up anything at her job. This place is nice, way nicer than La Salles and I bet she likes working here a lot more. Bet she makes more money too. “I’m her boyfriend.”

He lifts his brows, a little chuckle escaping him. “Really? Funny, she didn’t mention you when we were together last night.”

I’m so fucking shocked by what the asshole says that by the time I find my voice, he’s gone.

Second Chance is available at Amazon