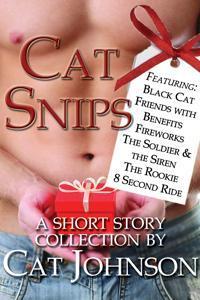 Black Cat
Lar has existed as a cat for a thousand years, with all the discomforts and indignities that go along with it. But when he’s adopted by Belinda and wakes up no longer a cat, but as a man and in her bed, can his curse finally be at an end? For more about the characters of Grace and Donna from Black Cat, look for Just Desserts by Cat Johnson.

Friends with Benefits
Meg thinks she’s getting the best of both worlds when she and her friend Jeff decide to start having sex with no strings attached, until Meg suddenly finds that, strings or not, she’s become attached to Jeff. The question is, does Jeff feel the same, or is there a new woman in his life?

Fireworks
The last thing Brad wants to do is attend leadership school over the 4th of July holiday. How could the Army think it was a good idea to schedule training in Georgia in July? When his roommate Joe suggests they go see the fireworks and they run into Mary Jo, Joe’s first love there, Brad soon realizes things are only going to get a whole lot hotter. Especially once he discovers that Joe likes to share.

The Soldier and the Siren
After having his heart torn out by a Dear John letter while deployed, David returns home without much hope of things getting better. Then he heard her voice and his whole world changed.

The Rookie (a Studs in Spurs series deleted scene)

Cat Snips is available on Amazon

Why do you need to read this book? Cat Snips is perma-free I believe. I picked up a copy for free and was quickly drawn into these short hot little stories. Worth more than the price I paid 🙂