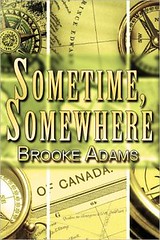 Janie Lovell is a brilliant project manager working at the Madrid office of a leading consulting firm. Beautiful and aggressive, she has what it takes to be successful in a man’s world and is respected by colleagues and competitors alike. During a trip to the Seattle headquarters, the last thing she expects is to fall in love with the sexy new CEO, Dennis Mitchell. During an action-packed weekend in Canada, the seeds of love are sown.

Destiny reunites them in Paris again a few months later, where Dennis declares his love for her. After going their separate ways, Janie finds out she’s pregnant but keeps it from him, not wanting to condition his love. Feeling lonely and miserable, she decides to go back to her native Australia. Before leaving, she spends a few days at her summer house in Ibiza, where she seeks comfort in Diego, her ex-husband. Dennis discovers her secret and unexpectedly appears on the scene, engagement ring in hand, to find her in Diego’s arms. He is outraged and leaves, convinced the baby isn’t his. A year later, they meet again at the Melbourne office and Dennis sees his son for the first time. Realizing his mistake, this time he’s prepared to overcome his fears to win her love back.

But will she accept his marriage proposal?

Warnings: This title contains some graphic language and sex scenes.

Is it difficult for a woman to find love in a man’s world of business?  Can Janie and Dennis conquer their issues and find true love?  Pick up a copy of Sometime, Somewhere and find out!

Janie Lovell works as a project manager for an international company.  She smart, assertive, and successful in a man’s world.  Just when she is ready for a vacation, she is sent to Seattle to do some training for some new clients.  Reluctantly, she agrees to go as long as she can have some time off while she is there.  She doesn’t expect to be so taken with the CEO of her company!  Dennis Mitchell, equally taken with Janie, convinces her to use her days off to take a quick trip to Canada for some horseback riding and sight seeing.  Janie and Dennis’s relationship starts developing on this trip.

At 73 pages, this is a quick read that feels like a novel.  Although this book has some graphic sex, it reads like a classic romance for the most part.  Janie and Dennis meet, they start developing feelings for one another, and then they are separated.  This relationship continues on and off over the next year and a bit.  Work gets in the way and the inevitable misunderstandings also conspire to keep them apart even longer.  I like the gentleness of this story.  It wasn’t a drop the laundry after the first date kind of love story.  Dennis and Janie took time to get to know one another over a period of time.  They seem to show their compatibility over and over throughout the story.  The only criticism that I have of the story is the slowness with which Dennis acts.  I found it frustrating.  He is the CEO of an international company, I would think he would be more decisive.  Likely other readers would see this aspect of the story differently than I did.

If you are looking for a more gentle love story, give this one a try!

Sometime, Somewhere is available on Amazon