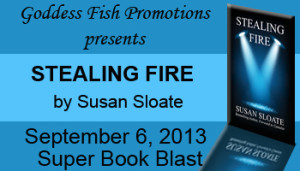 Susan Sloate is visiting the blog today to talk about her book, Stealing Fire. She is here to share some information about her book and also to give away a notebook that is perfect for journalling to a lucky commenter. If you are interested in increasing your chances of winning, click HERE to find more blogs to post comments on. 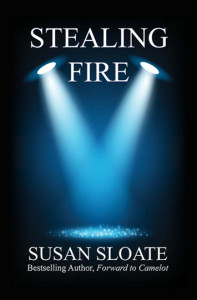 “How do you recognize your soulmate?

In glittery 1980’s Los Angeles, Beau Kellogg is a brilliant Broadway lyricist now writing advertising jingles and yearning for one more hit to compensate for his miserable marriage and disappointing life.

Amanda Harary, a young singer out of synch with her contemporaries, works at a small New York hotel, while she dreams of singing on Broadway.

When they meet late at night over the hotel switchboard, what begins will bring them each unexpected success, untold joy, and piercing heartache … until they learn that some connections, however improbable, are meant to last forever.

STEALING FIRE is, at its heart, a story for romantics everywhere, who believe in the transformative power of love.”

STEALING FIRE was a Quarter-Finalist (Top 5%) in the 2012 Amazon Breakthrough Novel Award Contest.

Oh, God, it was him, the bastard who had upset the switchboard operators and bellowed through the lobby loudly enough to alert all five boroughs. At three o’clock in the morning, asking for room service. Unbelievable.

Amanda leaned back in her chair. Her stomach was tightening inexplicably. “I’m sorry,” she said finally, when she could control her voice. “Room Service closes at midnight.”

She looked at her watch. “Ten after three.”

“Then whom am I speaking to?”

“I’m the night operator.  This is the main switchboard.”

“Well, main switchboard, you must all sound alike down there. I could swear I talked to you earlier tonight.”

“Good Lord. How long are the shifts around here?”

“Eight hours for everybody else. I’m working a double today.”

“Maybe I just love it here.”

“I guess you do. But I hope you’re well compensated.”

Trust a man to think of money first. “That’s not my major concern.”

Okay, enough’s enough.  It’s been a long day, made even longer by him. No reason to shoot the breeze with this guy. “Excuse me, I have other callers. Sorry I couldn’t help you.”

“Well, better luck with them.”

“Absolutely. My fault entirely, for falling asleep after a cross-country flight, a time change and a screw-up in hotel administration. Forget I even mentioned it.” The phone clicked in her ear.

She sat for some moments before she noticed she was trembling. This was the second time he’d undermined her—and it bothered her. 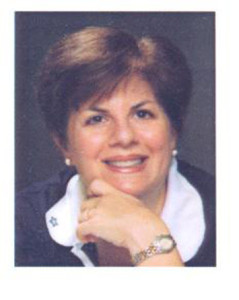 Susan Sloate is the author of 20 published books, including FORWARD TO CAMELOT (with Kevin Finn), an alternative history of the JFK assassination, STEALING FIRE, an autobiographical love story, and REALIZING YOU (with Ron Doades), for which she invented a new genre – the self-help novel.  FORWARD TO CAMELOT was a #6 Amazon bestseller, took honors in 3 literary competitions and was optioned for film production by a Hollywood company. STEALING FIRE was a quarter-finalist in the 2012 Amazon Breakthrough Novel Award Contest. Susan has also written young-adult fiction and non-fiction, including RAY CHARLES: FIND ANOTHER WAY!, which won a silver medal in the 2007 Children’s Moonbeam Book Awards, AMELIA EARHART: CHALLENGING THE SKIES, a perennial Amazon bestseller, and MYSTERIES UNWRAPPED: THE SECRETS OF ALCATRAZ, which led to her appearance on a special for The History Channel in 2009, as well as books for five girls’ fiction series. As a screenwriter, she has written an informational film for McGraw-Hill Films and optioned two scripts to Hollywood production companies. As a sportswriter, she’s covered the Los Angeles Dodgers, the Pittsburgh Pirates and the New York Mets. She’s also managed two recent political campaigns, founded the East Cooper Authors Festival (which put 18 professional authors in 17 area schools in one day) and serves on the Culture, Arts and Pride Commission of the Town of Mount Pleasant.