the bridgertons happily ever after 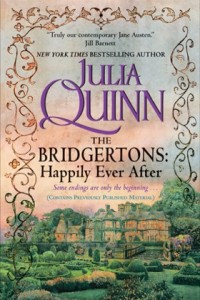 THE BRIDGERTONS: HAPPILY EVER AFTER

ONCE UPON A TIME, A HISTORICAL ROMANCE AUTHOR CREATED A FAMILY…

But not just any family. Eight brothers and sisters, assorted in-laws, sons and daughters, nieces and nephews, (not to mention an overweight corgi), plus an irrepressible matriarch who’s a match for any of them… These are the Bridgertons: less a family than a force of nature. Through eight bestselling novels, readers laughed, cried, and fell in love. But they wanted more.

And so the readers asked the author…

What happened next? Does Simon ever read his father’s letters? Do Francesca and Michael become parents? Who would win in a Pall Mall grudge match?

Does “The End” really have to be the end?

Why do you need to read this book? This book is a must read for all fans of The Bridgertons. Loved it from beginning to end!

The Bridgertons: Happily Ever After is available on Amazon

The Duke and I
The Second Epilogue

Midway through The Duke and I, Simon refuses to accept a bundle of letters written to him by his late estranged father. Daphne, anticipating that he might someday change his mind, takes the letters and hides them, but when she offers them to Simon at the end of the book, he decides not to open them. I hadn’t originally intended for him to do this; I’d always figured there would be something great and important in those letters. But when Daphne held them out, it became clear to me that Simon didn’t need to read his father’s words. It finally didn’t matter what the late duke had thought of him.

Readers wanted to know what was in the letters, but I must confess: I did not. What interested me was what it would take to make Simon want to read them…